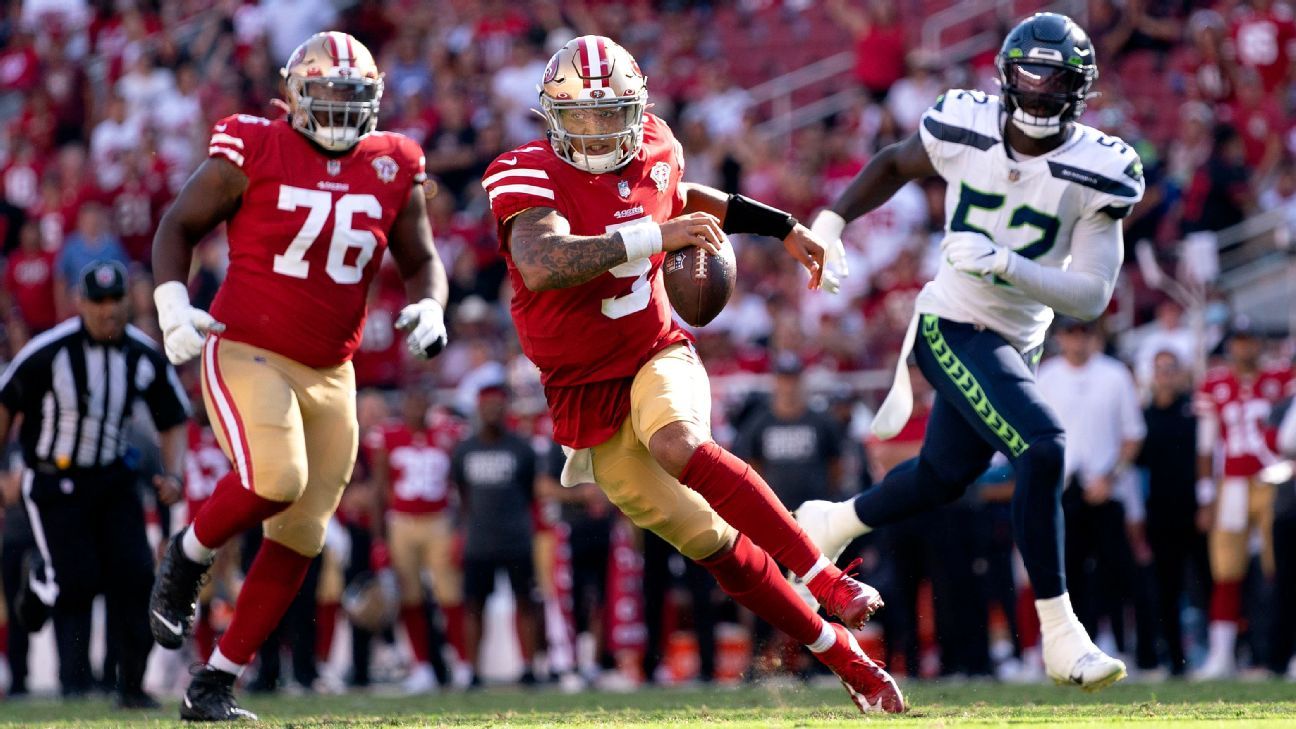 Niners coach Kyle Shanahan made it official Friday after a week in which all signs pointed to that conclusion. Garoppolo is dealing with a strained and bruised right calf and wasn’t able to practice, which leaves the door open for Lance, the No. 3 pick overall out of North Dakota State.

And with that opening come plenty of questions, not only about what will happen against the undefeated Arizona Cardinals Sunday (4:25 p.m. ET, Fox), but also what Lance’s debut might mean for the position for the rest of the season and beyond.

What can we expect from Lance against the Cardinals?

That Lance got extended action last week against the Seattle Seahawks should make him more comfortable than if he was getting that chance for the first time in Arizona. Lance played the entire second half against Seattle, going 9-of-18 for 157 yards with two touchdowns and rushing seven times for 41 yards.

Access elite coverage for every fan: highlights of the biggest games, original series from NFL legends, unprecedented analysis and more. Sign up now to unlock everything ESPN+ has to offer.

There were plenty of bumps along the way, but Lance also seemed to get better as the game went on. Having a whole week to prepare with a game plan tailored to his skill set should also help him after he entered last week’s game on short notice.

That means more designed quarterback runs, plenty of read-options and opportunities to make plays outside the pocket. Lance’s ability to run also could mean more off-schedule plays, something the Niners practiced during the week in anticipation of Lance starting.

“I feel very prepared,” Lance said. “I really do. That’s a credit to the coaching staff and the guys around me. Those guys have made me feel very confident this week and I feel confident in myself.”

How difficult will Lance’s first start be?

There’s not necessarily ever a good time for a rookie quarterback to make his first start, but Lance isn’t exactly walking into the ideal situation. In traveling to play the 4-0 Cardinals, Lance is attempting to become the second quarterback drafted in the first round of the Super Bowl era to beat a team with a record of 4-0 or better in his first start. Phil Simms is the only one to do it, and that was in 1979.

In addition, Lance is likely to be missing some key pieces in the offense. Already without starting running back Raheem Mostert for the rest of the season because of a knee injury, the Niners also might be without tight end George Kittle. Like Garoppolo, Kittle is dealing with a calf injury and did not practice all week. He’s listed as doubtful for Sunday.

All of that for a quarterback who will be 21 years and 154 days old on Sunday, the fourth youngest a quarterback has been at the time of his first start.

Despite that, the 49ers believe Lance won’t be overwhelmed by the moment.

“He actually has like a confident aura around him where you just start to believe in him the more you’re around him,” left tackle Trent Williams said.

What would it take for Lance to make the job his permanently?

Shanahan was asked Friday if naming Lance the starter was an “anointment” and Lance would be the starter from here on out.

“Our starting quarterback is hurt,” Shanahan said. “If he’d have been 100 percent today, we’d have gone with him.”

In other words, the expectation is the job will be Garoppolo’s when he returns from injury. But it’s not inconceivable that Lance could do something to change that. Generally, players don’t lose their jobs to injury, but it’s not hard to envision it happening in a situation where the replacement stepping in was drafted to take over at some point.

In fact, you don’t have to dig too far into 49ers history to find an example of it. In 2012, Alex Smith was in the midst of his best NFL season when he suffered a concussion in Week 10 against the Rams. Colin Kaepernick, who was in his second season, started in place of Smith the following week against the Bears and went 16-of-23 for 243 yards and two touchdowns in a 32-7 win. Smith never got the job back.

To say Lance needs to reach certain statistical benchmarks to do the same doesn’t allow for necessary nuance, but if he has a similar type of performance and the 49ers get a much-needed NFC West Division win against an undefeated opponent on the road, it would force Shanahan and his staff to take a long look at their quarterback situation during next week’s bye.