US Navy warship challenges China in South China Sea as 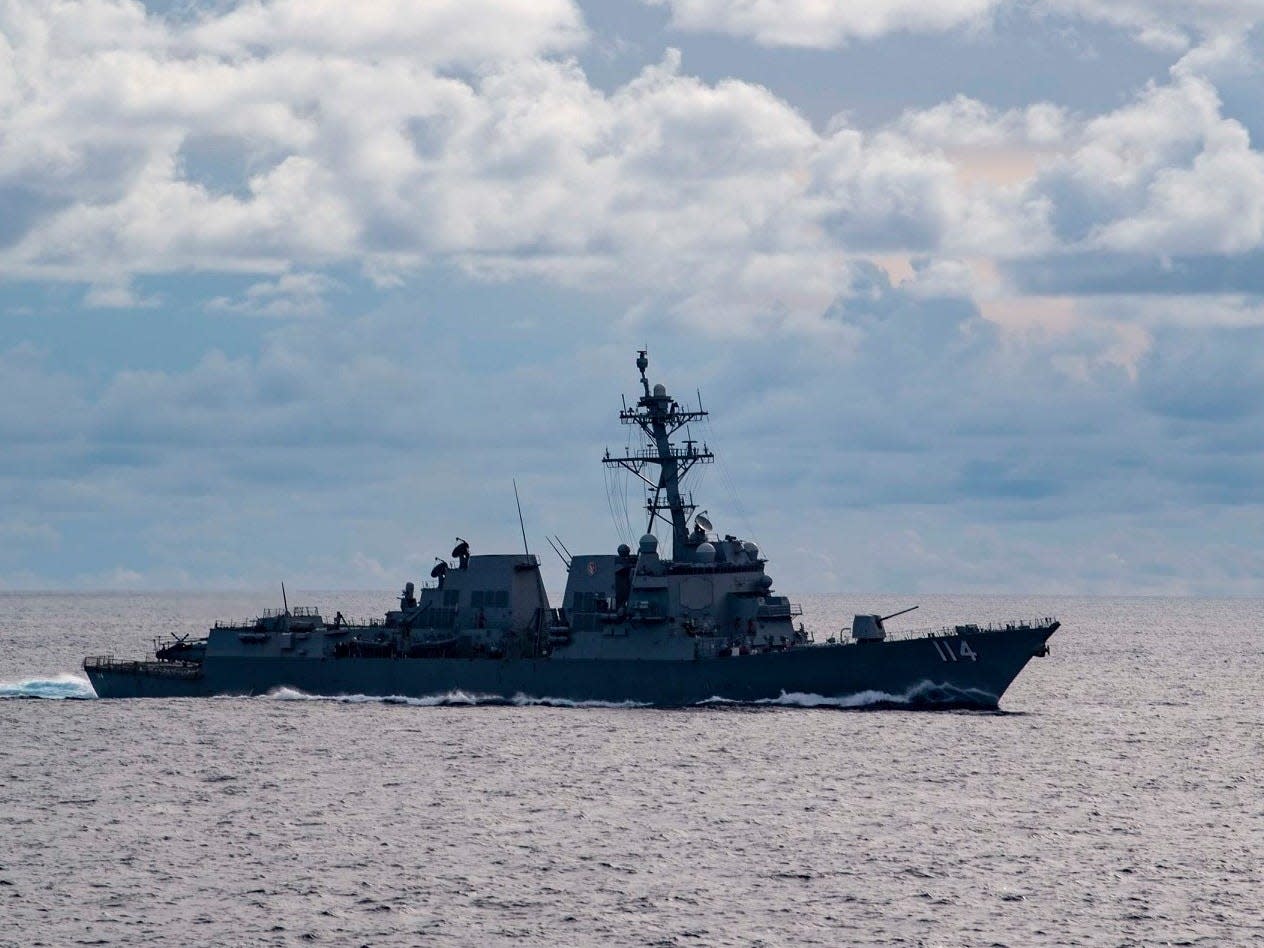 After the US State Department declared Beijing’s maritime claims in the South China Sea and efforts to assert dominance unlawful, the US Navy destroyer USS Ralph Johnson further challenged China with a sail-by operation Tuesday.

The Navy released a couple photos on Tuesday of the destroyer sailing near the contested Spratly Islands, and a Navy spokesman confirmed the ship conducted a freedom-of-navigation operation in the area.

“This freedom of navigation operation upheld the rights, freedoms, and lawful uses of the sea recognized in international law by challenging the restrictions on innocent passage imposed by China, Vietnam and Taiwan,” the Navy said in a statement.

“Unlawful and sweeping maritime claims in the South China Sea pose a serious threat to the freedom of the seas,” the service added.

“The United States upholds freedom of navigation as a principle,” the Navy said later in its statement. “As long as some countries continue to claim and assert limits on rights that exceed their authority under international law, the United States will continue to defend the rights and freedoms of the sea guaranteed to all. No member of the international community should be intimidated or coerced into giving up their rights and freedoms.”

The US is aligning its South China Sea policy with a 2016 international arbitration tribunal ruling and officially rejecting many of China’s claims to the contested waterway, Secretary of State Mike Pompeo said Monday.

“Beijing’s claims to offshore resources across most of the South China Sea are completely unlawful, as is its campaign of bullying to control them,” Pompeo said, adding, “The PRC’s predatory world view has no place in the 21st century.”

While China, Vietnam, the Philippines, Taiwan, Malaysia, and Brunei all have overlapping claims to the strategic South China Sea, China is among the most aggressive in enforcing its claims. Chinese military outposts can be found in the disputed Paracel and Spratly islands, despite a 2016 arbitration tribunal ruling that discredited many of China’s claims.

Beijing rejected the ruling by the international Permanent Court of Arbitration, which made the decision at the request of the Philippines after China’s seizure of Scarborough Shoal, and has continued to pursue its interests.

The USS Ralph Johnson near the Spratly Islands in the South China Sea.

Much to China’s frustration, the US routinely challenges Beijing’s restrictions on innocent passage and excessive claims through regular freedom-of-navigation operations.

The Navy has conducted at least six such operations this year alone, as well as multiple presence operations. The Air Force also routinely conducts bomber overflights in the region.

Earlier this month, the US sent two carrier strike groups into the South China Sea to conduct dual carrier operations at the same time the Chinese military was conducting exercises in the area.

In recent months, the US military has stepped up its activities in the South China Sea in response to what the Pentagon described as “increasing opportunistic activity by the PRC to coerce its neighbors and press its unlawful maritime claims in the South China Sea while the region and the world is focused on addressing the COVID-19 pandemic,” a global crisis that has triggered an apparent escalation in US-China tensions.

David Stillwell, the assistant secretary of state for East Asia and the Pacific, strongly criticized China’s efforts to enforce its will in the South China Sea as “gangster tactics” at a Center for Strategic and International Studies event Tuesday. He said the US “will not let China claim the South China Sea as its own,” USNI News reported.

Pompeo’s statement Monday provided clarity on the US position in the South China Sea, where Stillwell said the US will not remain neutral. The statement clears the way for potentially tougher US responses.

China’s Ministry of Foreign Affairs called the US statement on the South China Sea “irresponsible.”

He later stated: “We strongly deplore and firmly oppose the wrong move by the US and urge it to stop stirring up trouble on the South China Sea issue and stop continuing down the wrong path.”

Post Views: 125
Facebook
Twitter
Previous articleBubba Wallace furious after Michael McDowell wrecks him out of
Next articleCrime Has Declined Overall During The Pandemic, But Shootings And Killings Are Up

Klay a late scratch for Warriors due to sore knee

Nets’ Harris has had ‘setbacks’ in ankle rehab

Plaid, the service used by Venmo, Acorns, Robinhood, and more, may owe you some money