U.S. protesters call to ‘Defund the Police.’ What would that 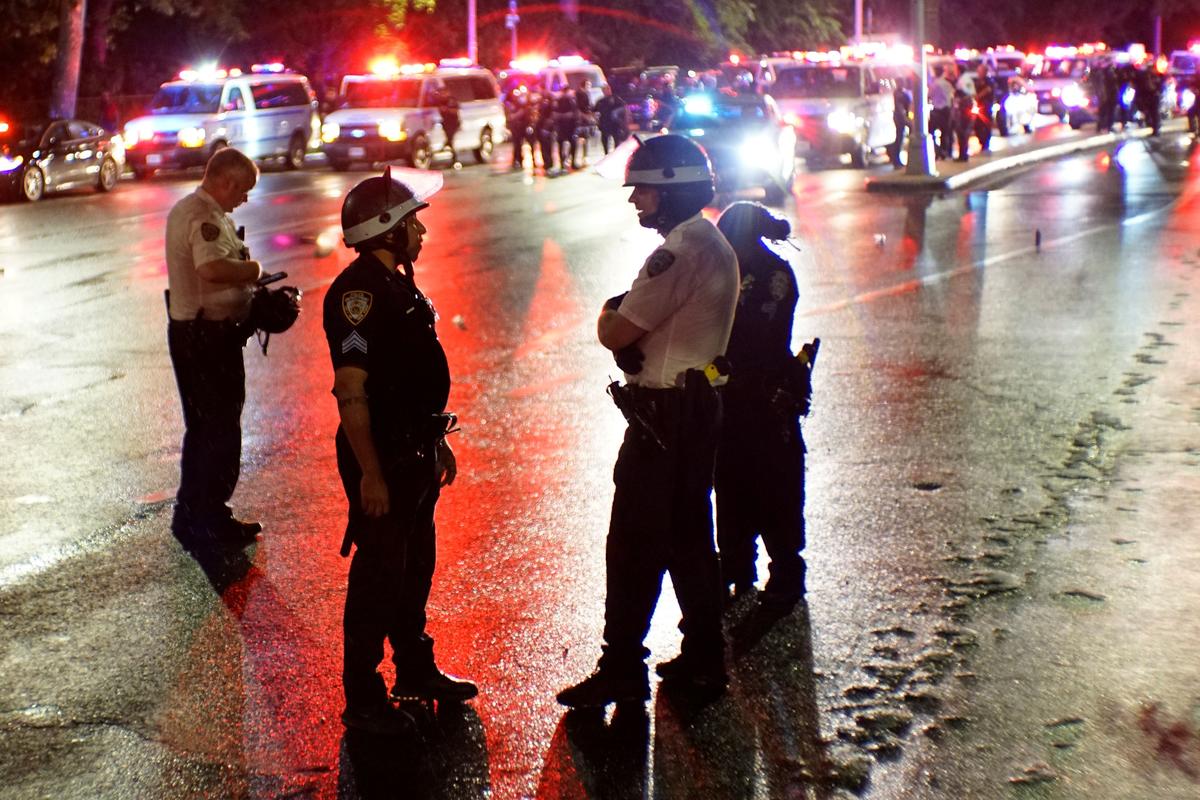 NEW YORK (Reuters) – Nationwide protests over the Minneapolis police killing of George Floyd, the latest in a long string of high-profile slayings of black men by white officers, have featured a common rallying cry: “Defund the police.”

Police officers stand by as demonstrators march along a street in protest against the death in Minneapolis police custody of George Floyd, in New York City, New York, U.S., June 5, 2020. REUTERS/Eduardo Munoz

The movement predates the current protests and is driven both by anger at the militarized posture of many U.S. police departments and by the recognition they are being called on to confront social ills including addiction, mental illness and homelessness that, advocates say, could be better addressed by spending on social services and rethinking what behaviors should be considered crimes.

Demands on streets from New York to Los Angeles have given higher prominence to the idea, drawing the attention of big-city mayors and on the presidential campaign trail.

WHAT DO PEOPLE MEAN BY ‘DEFUND THE POLICE’?

Some envision virtually abolishing modern police departments, which first appeared in the 19th century, and in some southern states grew out of patrols organized to catch runaway slaves.

Others see it as a call to slash city police budgets, which have grown significantly since the 1990s, particularly after a 1994 crime bill signed by Democratic President Bill Clinton, according to criminal justice activists. Policing and corrections accounted for about 30% of general funding in Atlanta and Orlando in 2017, and nearly 40% in Chicago, according to a report from the Center for Popular Democracy, an advocacy group.

Defunding advocates say money saved on policing could then be diverted to social programs.

“They don’t think the police can be fixed, so they’re trying to figure out how to reduce the burden of policing,” said Alex Vitale, a sociology professor at Brooklyn College who wrote the 2017 book “The End of Policing.”

“The police do not need to be called for every single instance of conflict,” Noor said.

HOW ARE CITIES RESPONDING?

In Los Angeles, city officials proposed cutting up to $150 million from the police department’s $3 billion budget this week, as part of a broader wave of spending cuts. Mayor Eric Garcetti, a Democrat, said the goal was to free up money “so we can invest in jobs, in health, in education and in healing.”

In New York City, which faces a $9-billion deficit, city council members pushed back against Democratic Mayor Bill de Blasio’s plans to cut the police budget by less than 1% while slashing youth services by one-third. Council members instead proposed a 5% to 7% cut for all agencies, including police.

Comptroller Scott Stringer has proposed a more sweeping overhaul, saying the city could save $1.1 billion over four years by reducing the number of police officers and cutting overtime. He proposed the savings be put towards “social workers, counselors, community-based violence interrupters, and other trained professionals.”

Large-scale reductions in spending could result in a rise in crime, said law-enforcement advocates.

“There will be a backlash as you see crime go up,” said Houston Police Chief Art Acevedo, who also serves as president of the Major Cities Chiefs Association.

Chicago Mayor Lori Lightfoot on Friday told reporters that “what I’ve heard from people in neighborhoods is that they want more police protection not less.”

“We don’t have to just maintain law and order and pay no attention to the man on the ground,” said the black former police chief in Orlando, Florida. “We can do both.”

Still, Demings said that Democrats need to listen to activists calling for defunding: “Every discussion moving forward — they should be involved in it.”

Biden had pledged a slate of criminal justice reforms before Floyd’s death, including stepping up Department of Justice investigations of police abuse as well as bringing more mental health and substance abuse specialists in to work with law enforcement.

HOW WILL THIS FACTOR INTO THE PRESIDENTIAL ELECTION?

President Donald Trump, who urged mayors and governors to take a hard line against protesters, seized on the defunding idea as a new attack against Biden.

“The Radical Left Democrats new theme is ‘Defund the Police,’” Trump said in a tweet this week. “Remember that when you don’t want Crime, especially against you and your family. This is where Sleepy Joe is being dragged by the socialists. I am the complete opposite, more money for Law Enforcement!”

Biden has called for a $300-million investment in policing, contingent on officers mirroring the diversity of their communities. 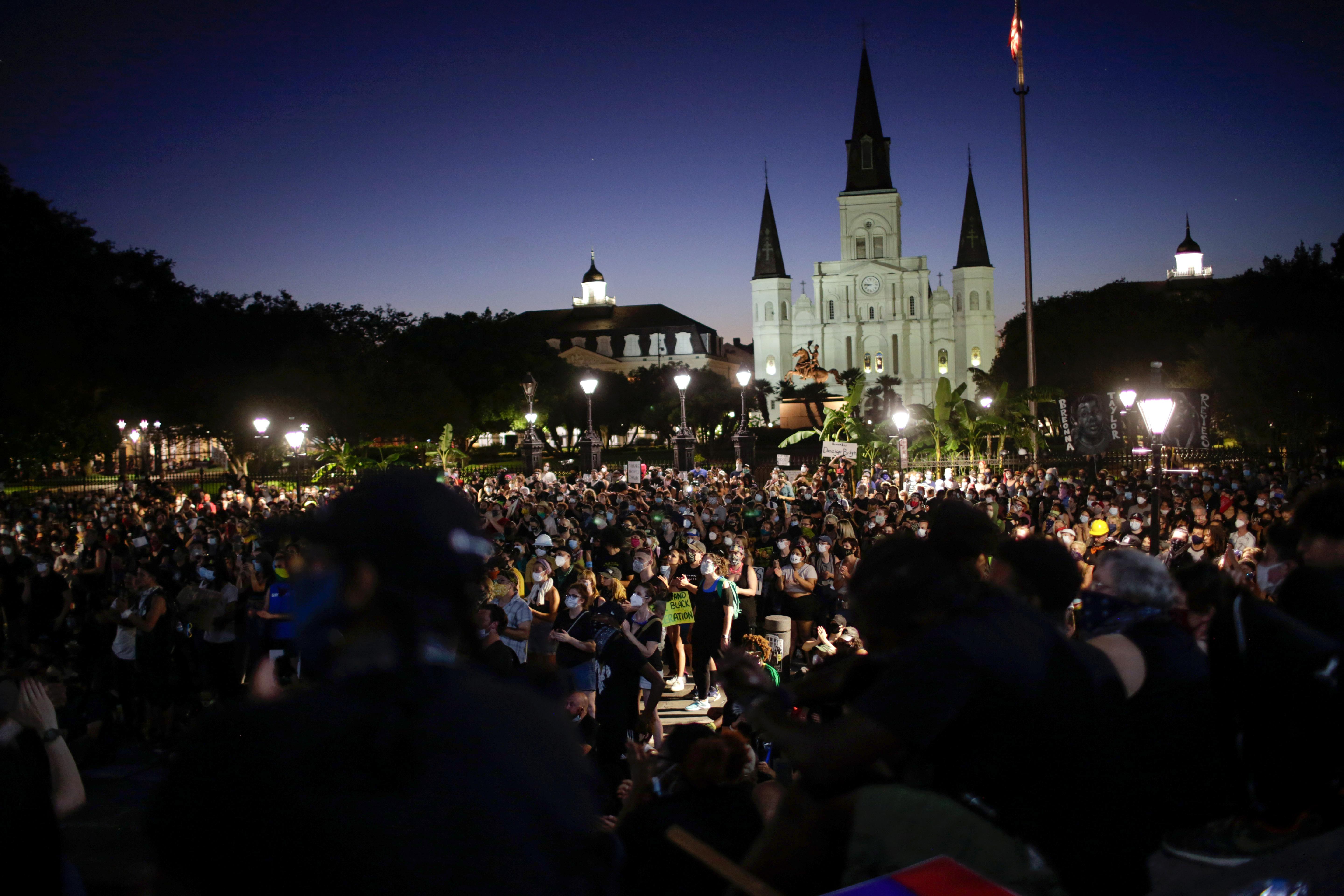 Asked about Garcetti’s plans in Los Angeles at a Thursday campaign event, Biden said “I think it makes sense” but that the response should vary from community to community. “It’s all about treating people with dignity.”