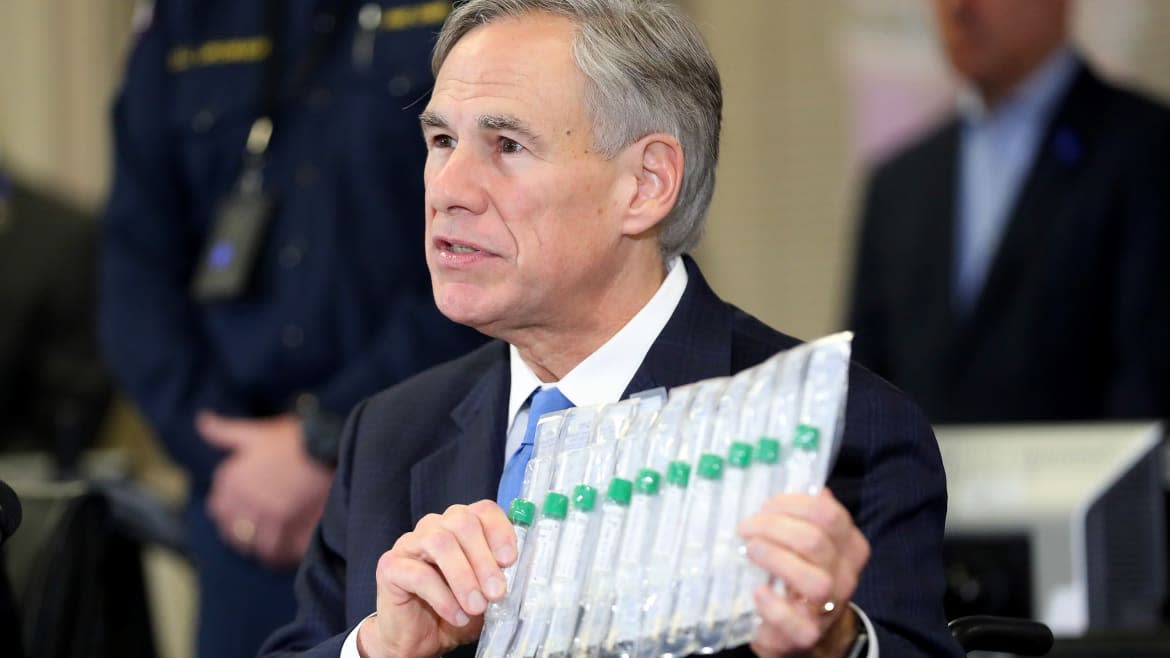 Harris County Judge Lina Hidalgo believes she knows what her county needs to fight back against COVID-19.

But because of Texas Gov. Greg Abbott, she says she isn’t able to follow through.

“I’m at the mercy of what powers he positively gives us,” Hidalgo told The Daily Beast. “As opposed to being able to use my own tools.”

As Texas faces a resurgent coronavirus and some officials have emphasized concerns about hospitals in the state becoming potentially overrun or overwhelmed, Hidalgo can find plenty of reasons to worry. Hospitalizations started to increase in late May, she says, and haven’t come down since. And recommending that people should stay home just isn’t enough.

“We need a stay at home order in Harris County,” she said of her area that includes Houston. “And we need to be able to do that until the curve comes down on the other side.”

Abbott, the Republican governor of Texas, is resisting calls to give local authorities more control to fight the coronavirus themselves after COVID-19 cases spiked in the state recently. Texas reported more than 10,000 new cases Tuesday, marking a new one day record for the state according to state health department data.

Both Hidalgo and Steve Adler, the Democratic mayor of Austin, Texas made their case on national political shows Sunday that they wanted more local control. But at the moment, they’re limited in what they can do locally and say they would need the governor’s help to make aggressive moves, like a stay at home order.

In interviews with The Daily Beast this week, the leaders of both areas feared for what harm could come to their communities without being given the ability to have more local control by the state’s Republican governor.

“He’s putting at risk the ability for economies to stay open and he’s putting lives at risk,” said Adler.

“I feel like we’re responding with one hand tied behind our back,” said Harris County Judge Lina Hidalgo, also a Democrat. “We know what works. We ought to do that, and that’s what the community deserves. I think anything short of a stay home order is a gamble, and we don’t have time for that.”

Texas has become a major hotspot for the coronavirus in recent weeks, with the governor himself halting the state’s reopening push over the mounting cases. Total current hospitalizations have risen sharply in the state, according to The Texas Tribune, with new cases also spiking according to the news site.

But in an interview Monday night with local television station KFDM News at 6, Abbott responded to the push by instead chiding local officials, saying that the county judges or mayors that are looking to take more action have “absolutely refused to enforce the current executive orders that are already in place. What they need to show is action, not absenteeism.”

“They need to show up, enforce the law as it is, before they are given any further authority,” Abbott said in the interview. “They ask for more and more, but they do absolutely nothing.”

Texas Gov. Moves to Stop COVID-19 but It’s Already Out of Control

Locally, the mayor of Austin said Abbott was wrong to not give him and other cities local control and is still pushing to have that ability.

“It’s the best way for the state to be able to ultimately tamp down this virus and to figure out what is the right balance in each community between keeping the economy open in a sustainable way and saving lives,” Adler said. “…The governor’s suggestion that he’s not going to do it for those reasons because he thinks that cities and counties are not enforcing the existing rules is just not right.”

And while Adler said Tuesday he would not automatically make a stay at home order if he was given the power to do so today, he still wants to the right be able to use that tool.

Elsewhere in the state, Harris County, which includes Houston, is now at a severe COVID-19 threat level according to the county’s coronavirus website. And on Sunday, the mayor of Houston appeared on Face the Nation warning that  “if we don’t get our hands around this virus quickly in about two weeks our hospital system could be in serious, serious trouble.”

Abbott’s resistance comes as the public health situation in Texas has taken a terrifying turn in recent weeks. Late last month, Abbott paused the state’s reopening push, citing rises in hospitalizations from COVID-19 and new cases. Soon after, he rolled back even further by imposing an executive order for bars to close down.

And before the fourth of July weekend, the governor signed an executive order that put in place a statewide mask requirement for public locations that applies to “counties with 20 or more positive COVID-19 cases,” according to a statement from the governor’s office.

Battles between local officials wanting to be more aggressive and statewide officials emphasizing a more lax approach have become common during the pandemic. In late March, the governor of Mississippi quickly drew the ire of local officials over a confusing executive order that they said hampered their local power.

A similar complaint later came from the Democratic mayor of Savannah, Georgia who said in May that the state’s Republican governor had superseded his ability at the local level, creating a situation that meant his city essentially “could do absolutely nothing.”

That same month, as states moved into reopening, the attorney general of Texas sent letters to the mayors of Austin, San Antonio and a trio of counties chiding them over specific measures and the raising the potential of a legal battle. The issues targeted included local mask requirements, which went farther than what the state would allow, and shelter-in-place orders.

In Dallas County, another area of the state hit hard by the virus, Judge Clay Jenkins is not calling for a local stay at home order this week. But in a letter to Abbott Sunday, he urged for the governor to close locations like gyms and inside restaurant dining after warning the GOP leader that “multiple hospital systems are reporting the largest volumes of COVID-19 patients since the beginning of the pandemic.”

After calling for Abbott to implement a variety of requirements across the state, or at least regionally,  Jenkins implored the governor to roll back an earlier order “restricting local control” so that his county could make the moves to try and  “slow the spread of the rampant and devastating COVID-19 virus.”

“Governor Abbott has stripped local officials of their authority that’s worked well in past emergencies and made Texas a leader until he took over in this emergency,” Jenkins, a Democrat, told The Daily Beast. “So it hasn’t worked out well at all.”


Post Views:
114
Facebook
Twitter
Previous articleCalifornia officer under investigation for allegedly sharing ‘vulgar image’ of
Next articleStrict Rules Apply, But Visitors Will Be Allowed Back In New York Nursing Homes

Clinton Square ice rink in Syracuse open for the season

Polo G’s ‘Momager,’ Stacia Mac, on How ‘Rapstar’ Really Did