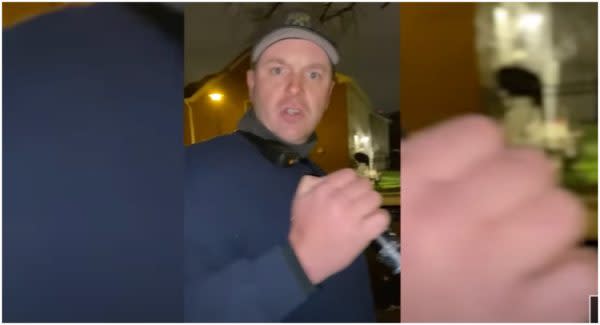 A Philadelphia police officer has been placed on administrative duty and an investigation has been launched after a video, that has since gone viral, resurfaced showing a white cop talking down to a young Black man.

In the clip, which doesn’t appear to start from the beginning of the exchange, officer Hoover — whose name can be seen on his police vest — appears to be following the young man.

The young man tells the officer that he’s not committing a crime, to which Hoover responds, “I’m allowed to be here; it’s a free country.” The young man, who’s recording the encounter, says “all right; me too,” before the cop asks him “why are you chasing me?” The young man denies chasing the officer.

The video appears to cut and the officer then tells the individual “Shut your mouth, boy. You don’t live down here” and “where you from.” He adds, “You too stupid to insult,” before later yelling “Worldstar” — an popular online platform where viral videos are shared.

The narrator says the young man, whom he identified as Gabriel, reportedly was leaving a relative’s home on New Year’s Eve when the encounter occurred. Later, the officer is seen still following the young man, asking him to take selfies and referring to him as his “homie.”

The man pleads with the cop to back up. “I don’t want to get shot. I’m Black,” he says. Officer Hoover flashes his flashlight in the man’s face, getting more aggressive as he closes in on the young man, who pleads to have a supervisor called.

The two begin to taunt each other until Hoover crosses paths with the young man and eventually arrests him on charges of disorderly conduct and possessing a small amount of marijuana.

The video sparked outrage; several people in the comments section slammed the officer, including one person who wrote, “This cop should not only be fired, he should be JAILED, with all certifications REVOKED. This is not only unacceptable behavior, this is psychotic behavior.”

Another person commented, “This cop calls him homie, boy, dog all the while he’s calling the cop sir. This is some bs on so many levels.”

The Philadelphia Police Department since has been made aware of the video in a Twitter post just one day after the incident was made public. “We understand the video circulating has caused anger and disappointment. All PPD officers are expected to discharge their duties with honor and integrity.” they wrote.

That person also noted that, “The officer involved has been placed on administrative duty pending the outcome of an Internal Affairs investigation.”