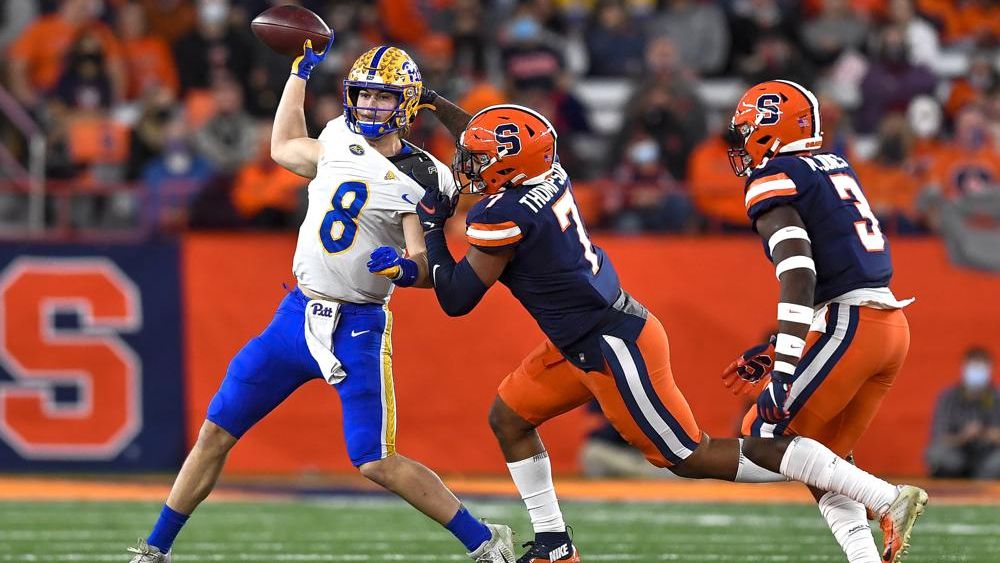 Pickett threw for four touchdowns to break the Pittsburgh school record for scoring passes in a season, and the 20th-ranked Panthers beat Syracuse 31-14 on Saturday night for their fourth straight win heading into next week’s Atlantic Coast Conference championship against Wake Forest.

“Offensively, we knew we had a good test coming in,” Pickett said. “Our defense did a great job slowing them down and we kind of just got into our rhythm on offense.”

“This was a legacy game to go down in history as one of the teams to win 10 games, so it’s really special,” Pickett said.

Pickett connected with tailback Rodney Hammond Jr. and wideout Jordan Addison in the second quarter. He hit tight end Gavin Bartholomew and Addison again in the third to stake the Panthers to a 28-7 lead and boost his season total to 40 touchdown passes. That’s three more than the previous record set by Dan Marino in 1981 and matched by Rod Rutherford in 2003, and his career total is now at 79, equaling Marino’s school mark.

“It means a lot,” said Pickett, who finished 28 of 38 for 209 yards with one interception. “This whole season has been a special season. I’m just grateful for it all.”

Syracuse closed to 28-14 on Garrett Shrader’s second touchdown pass of the game to Courtney Jackson late in the third, but the Orange offense struggled all night. Shrader finished 17 of 24 for 217 yards and was sacked five times.

“It’s frustrating that we didn’t pull it out,” Shrader said. “We had opportunities. We’ll learn from it. We’ve just got to find a silver lining and carry it into next year.”

Syracuse (5-7, 2-6) was coming off a pair of lopsided losses and failed on its third try to reach the six victories required to play in the postseason. It’s the fifth losing season in coach Dino Babers’ six years.

The Panthers clinched the ACC Coastal Division last week with a 48-38 win over Virginia and were hoping to keep building momentum heading into their second appearance in the conference title game, something they failed to do in 2018. Pitt wrapped up the division that year with a win at Wake Forest, then headed to Miami and was drilled by the Hurricanes. A 42-10 loss to eventual national champion Clemson followed.

The Panthers stayed on track against the fired-up Orange, who took a 7-0 lead midway through the first quarter and held Pitt in check until early in the second.

Led by Sean Tucker and Shrader, Syracuse entered the game leading the ACC in rushing with an average of 230 yards per game, and they were facing the conference’s top defense against the run. Pitt, allowing just under 100 per game, held the Orange’s imposing duo to 27 yards on 29 carries for the game as Syracuse finished with a season-low 25 yards rushing, averaging 0.8 yards per carry.

Tucker, third nationally with 1,467 yards and averaging 6.3 yards per carry entering the game, finished with 29 yards on 13 carries.

“Tucker’s a good football player, but that’s what we do,” Narduzzi said. “We want to make people one-dimensional. I think we have a pretty good scheme of what we do. We were able to bottle it up and that was the plan.”

Syracuse scored on the game’s first possession, driving 75 yards in 14 plays that took 7:25 off the clock. Shrader completed four passes, hitting Devaughn Cooper for 8 yards on fourth-and-3 from the Pitt 21, and following with a 12-yard touchdown toss to Jackson.

The Panthers got rolling early in the second quarter and scored twice. Hammond sparked the surge, reeling off six carries for 19 yards before scoring on a 15-yard catch-and-run.

Pickett hit Bartholomew on a 4-yard toss and Addison with a 5-yarder, and Sam Scarton added a 26-yard field goal midway through the fourth.

Syracuse center Airon Servais started his 60th straight game, one of three players to do so at the FBS level this week.

Pittsburgh: The Panthers are on cruise control heading to the ACC title game with Pickett in top form and the defense thriving.

Syracuse: Tucker has said he plans on returning next season but indicated a coaching change might alter his plans.

Pittsburgh: Plays Wake Forest for the ACC championship next Saturday.

Illinois man dies after jumping into frozen pond to save

Season 2 ‘Cheer’ cast on turning the show down

Twitter Caught Wind Of Paramore Performing With A Choir And

‘Penn and Teller: Fool Us,’ ‘Masters of Illusion,’ ‘World’s Funniest