McMahon: Decisions on any potential COVID-19 mandate will be driven 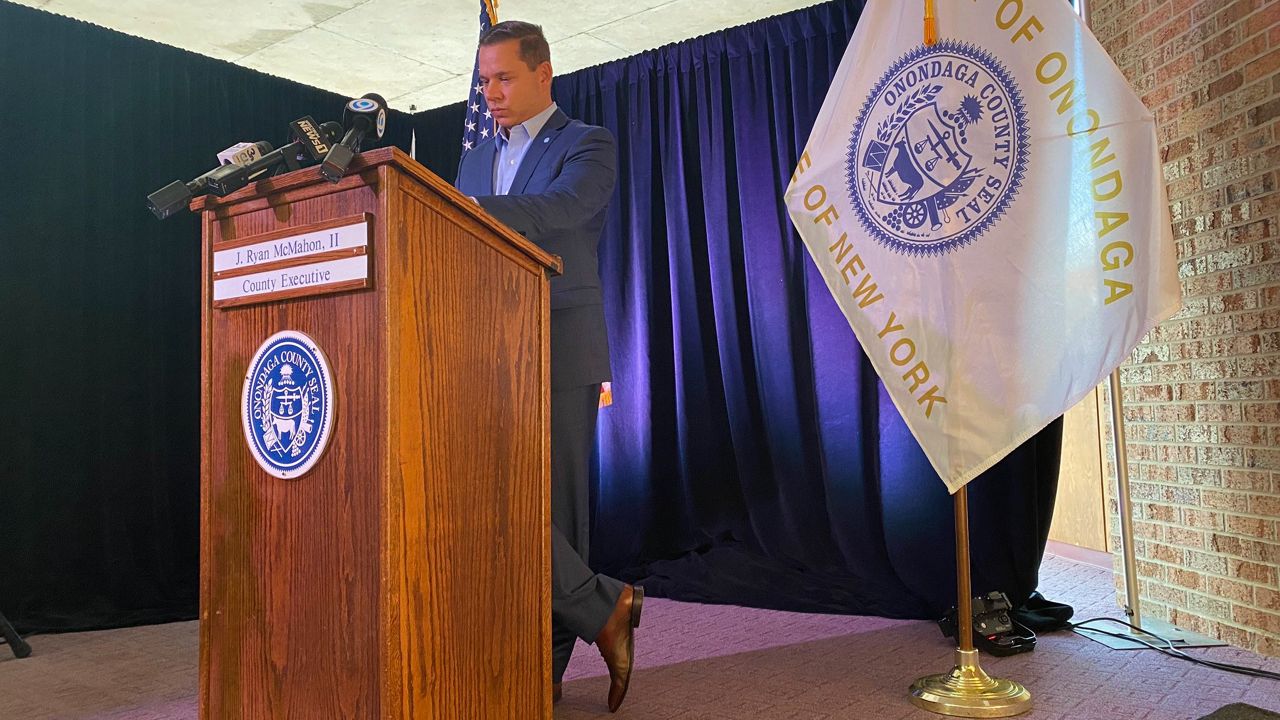 As colder months have driven people indoors, increasing COVID-19 case numbers from their summer lows, Onondaga County Executive Ryan McMahon said Tuesday that at this point, no further mandates will be put in place.

“We are 100% data driven on all decisions,” McMahon said. “Every day, I get accused of not making enough, not putting enough mandates in place. And therefore, people blame me for every bad outcome. Or I get called a RINO or I’m against liberty, on both sides of the aisle. And we are not going to change in the process of looking at the data and, specifically, when it comes to any potential mandates.”

#NoMaskMandates for Onandaga. McMahon says masks mandates only really thought about where there’s prolonged contact with our most vulnerable.

Back in the spring, McMahon was a strong proponent of the state government returning most COVID-19 mitigation measures to local governments. Since then, local governments around the state have taken measures into their own hands. New York City requires proof of COVID-19 vaccination to eat at any restaurant. On Monday, the Erie County executive imposed a mask mandate for all public indoor areas.

Nothing like that will be suggested yet in Onondaga County, mostly because McMahon said the county is doing better than similar upstate areas.

He said Onondaga County currently has a rate of 52 positive COVID-19 cases per 100,000 people. According to McMahon, that number is 68 for Oneida and Erie counties, and 59 for Monroe County.

“We’re tracking this because even though we’re all going through elevated cases throughout New York state as we’ve gone indoors, it’s important that we’re comparing ourselves to similar communities,” McMahon said.

The county executive said a 70-cases-per-100,000 people rate is a threshold where further mitigation efforts may be looked at. Those might be providing testing at large gatherings or considering an indoor mask mandate for specific areas where vulnerable people have to interact with the public, like grocery stores or retail settings.

Onondaga County officials also will meet with hospital leaders in Syracuse to develop a capacity metric that on its own would trigger mitigation measures, McMahon said.

McMahon emphasized those types of measures would hopefully be region-wide, saying measures in one county would only be so effective if other counties don’t follow suit.

For the time being, the main focus McMahon said is on vaccinations and booster shots to keep hospitalization numbers from climbing.

“Fatigue is not even the right word anymore.” McMahon says county needs to be reactive for potential future decisions but public needs to stay aware of vaccines and community data.

One more person has also died, a man in his 70s with underlying conditions.


Post Views:
679
Facebook
Twitter
Previous articleAaron Rodgers said he had painful ‘COVID toe,’ but then
Next article‘La Casa,’ ‘The New Greatness’ and ‘Continuum VR’ Triumph at

Certain criteria must be met to trigger an Amber Alert

In America’s gun violence ‘epidemic,’ Oxford High in Michigan is

Why the government is constantly on the verge of shutting

Second Omicron Case in U

High on a hill, San Francisco calls to progressives —