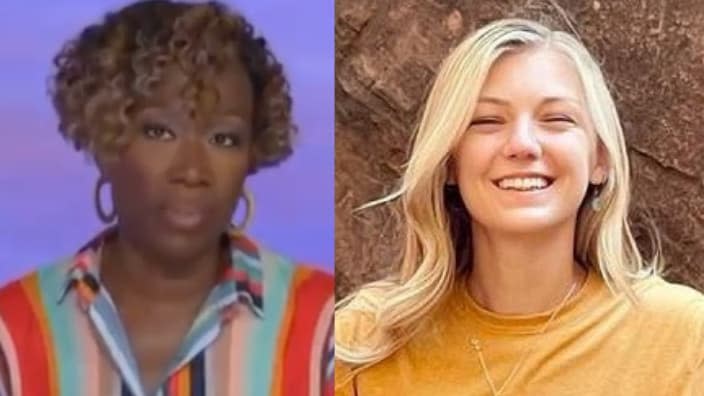 On Monday’s airing of The ReidOut, host Joy Reid addressed the massive media coverage surrounding Gabrielle “Gabby” Petito, the young New York woman found dead in Wyoming after going missing earlier this month while on a road trip from Florida with her fiancé.

Remains found in Wyoming’s Grand Teton National Park were confirmed as Petito on Tuesday. Her boyfriend, Brian Laundrie — who has been named as a person of interest in her disappearance and apparent death — went missing after refusing to speak with investigators.

“The way this story captivated the nation,” Reid told her viewers, “has many wondering why not the same media attention when people of color go missing? Well, the answer actually has a name: Missing White Woman Syndrome, the term coined by the late and great Gwen Ifill to describe the media and public fascination with missing white women like Laci Peterson or Natalee Holloway while ignoring cases involving of people of color.”

While noting the inconsistencies in the media’s coverage of Americans gone missing, Reid acknowledged the sadness of the Petito case. “It goes without saying that no family should ever endure that type of pain,” she said, “and the Petito family certainly deserves answers and justice.”

On Reid’s weekday show Monday, panelists included Derrica Wilson of the Black and Missing Foundation and Lynette Grey Bull of Not Our Native Daughters Foundation. They pointed out a case of a missing 24-year-old young Black man who disappeared after a car crash in Arizona in June. His case is only now starting to get national media attention.

As previously reported, Daniel Robinson was last seen driving away from his job site in the Buckeye, Arizona desert on June 23. His father, David Robinson, has been organizing search parties, launched a website, and he even hired a private investigator after he felt law enforcement authorities weren’t providing much help. Their family has set up a GoFundMe to continue their search for Daniel.

Reid noted that she had not heard of Daniel Robinson’s case until a friend shared the information with her.

“It is definitely the issue,” said Wilson. “And we have been sounding the alarm for nearly 14 years because of this. When it comes to missing persons of color, men, women and children, our cases are not taken seriously, and no one is looking for us if we were to go missing.”

Reid asked guest Grey Bull why she feels missing indigenous women don’t get media coverage, and she replied, “One of the main factors and one of the key factors that a lot of people don’t want to talk about is that it’s racism. It’s systemic racism. We’re still fighting oppression in our tribal communities. We are still facing inequality across the board, whether it comes to our community, housing, jobs.”

“I mean, you can pick any topic in any country and have an issue there,” said Grey Bull. “So, it’s no different when it comes to missing, murdered indigenous women and girls.”

How much money YouTubers with 1 million subscribers make