Denver police ordered to limit use of tear gas and 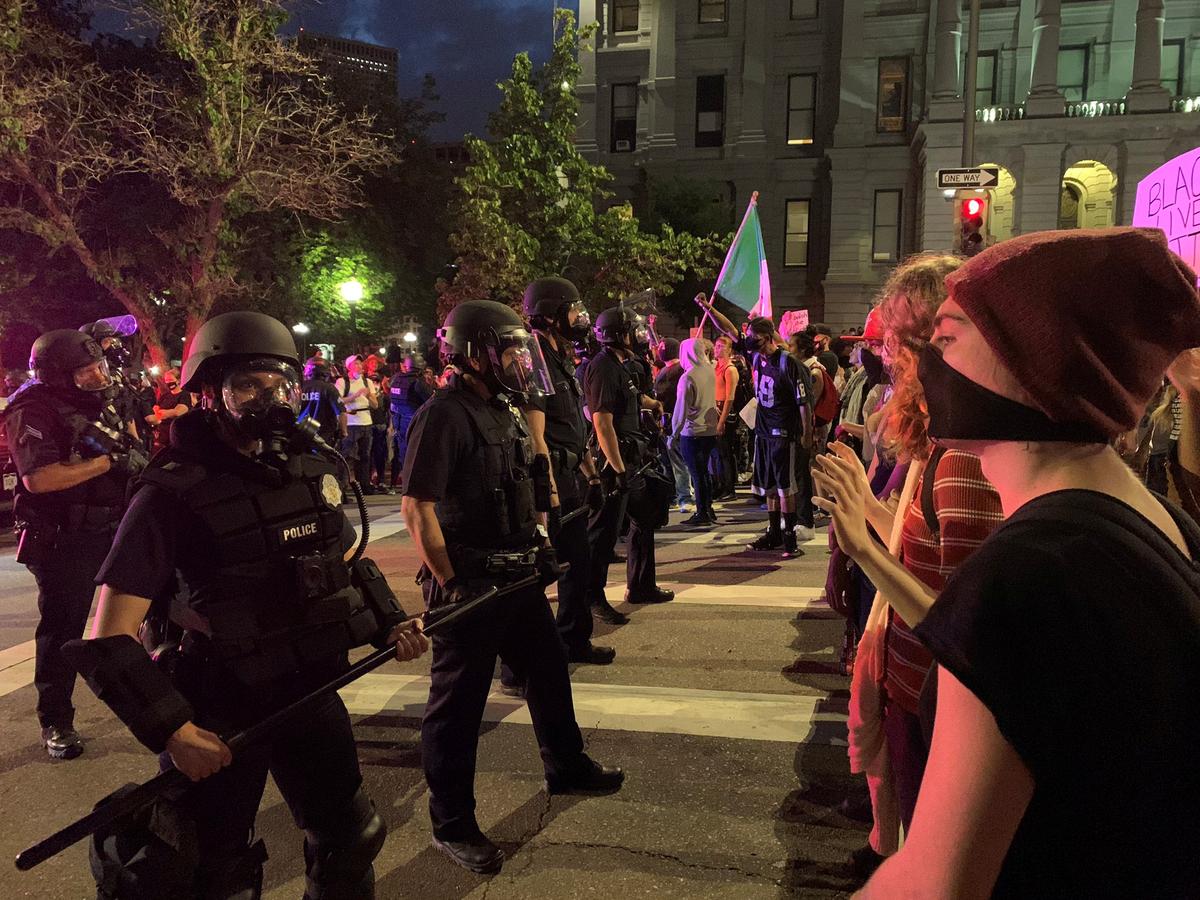 DENVER (Reuters) – A U.S. District Court Judge ordered Denver police on Friday not to use tear gas, plastic bullets and other “less-than-lethal” force such as flash grenades against protesters, unless approved by a senior officer in response to specific acts of violence.

FILE PHOTO: Demonstrators face off with police in riot gear near the Capitol building, to protest Monday’s killing of African-American man George Floyd in Minneapolis by a white police officer, in Denver, Colorado, U.S., May 28, 2020 in this image obtained from social media. Courtesy of Madison Lauterbach/Ms. Mayhem Magazine/@MsMayhem_Mag via REUTERS

The temporary injunction was in response to an ongoing local lawsuit filed on Thursday in Denver District Court by protesters complaining about excessive force used by officers during demonstrations following the death of an unarmed black man, George Floyd, in police custody in Minneapolis last month.

The ruling, which is in effect for 14 days, cited examples of protesters and journalists being injured by police.

“Peaceful demonstrators’ legitimate and credible fear of police retaliation is silencing their political speech,” it said.

The death of Houston native Floyd during his arrest for a non-violent offense has touched off national protests against the use of force by police.

In Denver, throngs of marchers have gathered around the state Capitol every day for more than a week, chanting and carrying signs protesting Floyd’s killing.

Some people among the mostly peaceful crowd broke windows in the state Supreme Court building and a nearby museum overnight on May 29. Some store front windows were smashed and looters made off with merchandise.

While the lawsuit, brought by four activists, acknowledges that some demonstrators “engaged in destructive behavior,” and it also says the vast majority were peaceful.

“Nonetheless, the Denver Police Department … and other police departments at their invitation, have engaged in injurious riot control tactics without issuing clear warnings and orders to disperse,” the complaint said.

At least one woman sustained a serious eye injury when she was struck by a projectile, the lawsuit said.

The court ruling cited numerous instances, captured on video, of police using tear gas, projectiles and other measures against peaceful protesters engaged in their U.S. Constitutional rights to gather and protest.

Journalists were also specifically targeted and shot with projectiles, “while in the process of documenting the scene,” the ruling said.

In his decision, U.S. District Judge R. Brooke Jackson said he sought to balance citizens’ constitutional rights against police officers’ ability to do their jobs, and that Denver police had “failed in its duty to police its own.”

“If a store’s windows must be broken to prevent a protester’s facial bones from being broken or eye being permanently damaged, that is more than a fair trade,” Jackson wrote in his 10-page ruling.

“These are peaceful demonstrators, journalists, and medics who have been targeted with extreme tactics meant to suppress riots, not to suppress demonstrations.”

His ruling stops Denver police from using chemical weapons or projectiles unless a captain or more senior on-scene supervisor authorizes such use of force in response to specific acts of violence or destruction of property.

No non- or less-lethal projectiles may ever be aimed at the head, pelvis or back, or fired indiscriminately into a crowd, said the ruling, which also applies to any non-Denver officer deployed to the demonstrations.

Chemical agents or irritants may only be used after an order to disperse is issued and officers have allowed enough time and space for protesters to leave safely, it said.

Tyrone Campbell, a Denver Police spokesman, said the force would comply with the judge’s order.

Milo Schwab, an attorney for four of the plaintiffs, told Reuters that the ruling was “a humbling victory.”

Apple TV Releases Trailer for ‘Severance’; Disney Plus ‘The Proud

NHL Power Rankings: Trendspotting every team from the last month