HomeSportsConor McGregor gets into scuffle with Machine Gun Kelly at
Sports

Conor McGregor gets into scuffle with Machine Gun Kelly at 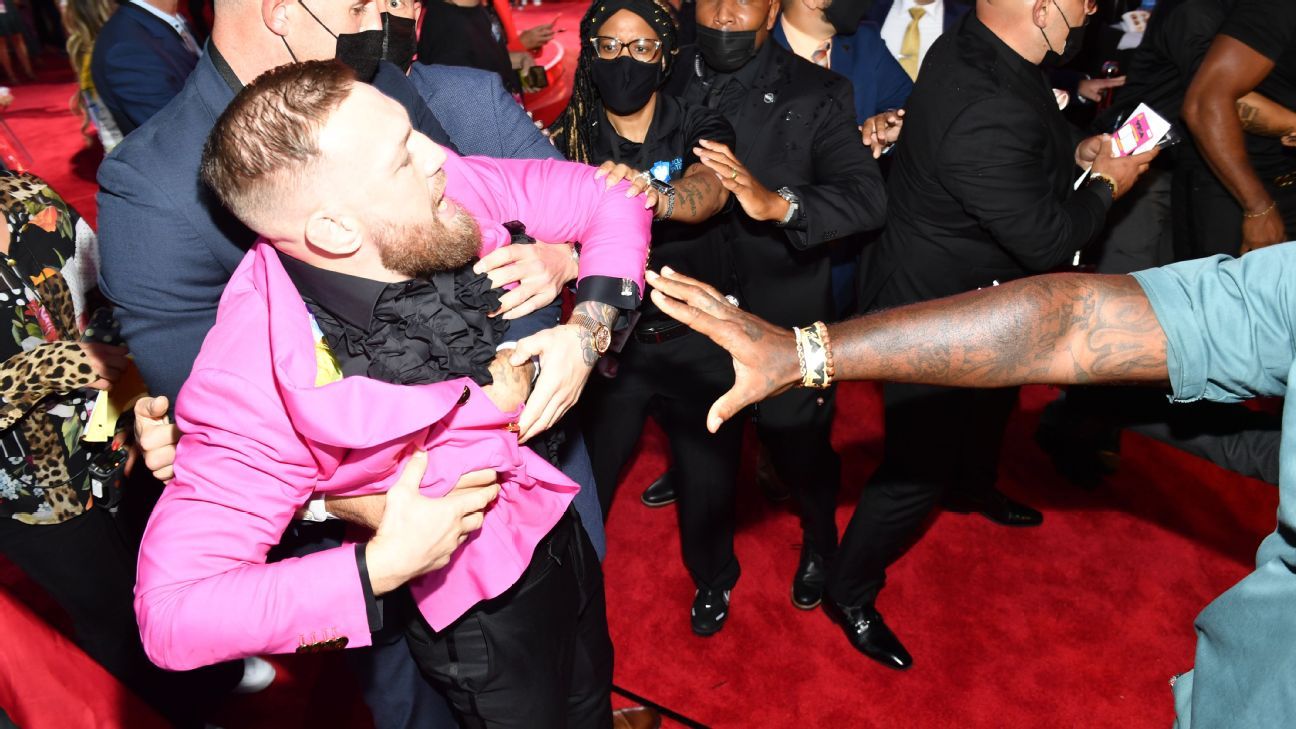 McGregor and Kelly were both on the MTV Video Music Awards red carpet at Barclays Center in Brooklyn when things turned heated. McGregor could be seen in videos lunging at Kelly, who was held back by security and his girlfriend, actress Megan Fox. Seconds later, McGregor was escorted away, but more video captured him throwing a cocktail in Kelly’s direction.

It’s unclear exactly what started the conflict and, at this time, neither party is saying. TMZ reported that McGregor walked up to Kelly to say hello, Kelly said something inaudible and then Kelly’s security attempted to push McGregor away. McGregor took umbrage with that, per TMZ, and that’s when the situation escalated.

An initial TMZ report stated that McGregor asked Kelly for a photo and Kelly declined, which McGregor’s spokesperson, Karen Kessler, denied in a statement to ESPN.

“Conor McGregor did not ask anyone for a picture, nor did he instigate this incident,” Kessler wrote in the statement. “He does not know Machine Gun Kelly, outside of the fact that he attended Conor’s fight this past July.”

Conor McGregor can be seen in the background with Machine Gun Kelly (right) and his girlfriend, actress Megan Fox, talking on the red carpet. EPA/JASON SZENES

McGregor downplayed the situation in an interview later with Entertainment Tonight, saying “I just showed up” and he doesn’t know what happened.

“Nothing happened with me,” McGregor said. “I only fight real fighters. People that actually fight. I certainly don’t fight little Vanilla Ice white rappers. I don’t even know the guy, don’t know anything about him except that he’s with Megan Fox.”

Kelly, 31, was asked about what happened in a red-carpet interview and he made a noise with his mouth, hit the microphone with his hand and walked away.

McGregor, 33, is currently rehabilitating a broken leg in Los Angeles. He suffered the injury at UFC 264 on July 10 in a loss to Dustin Poirier, an event that Kelly attended with Fox at T-Mobile Arena in Las Vegas. McGregor, the biggest star in UFC history, is the first UFC fighter to ever hold two belts from different weight divisions at the same time, but he has lost three of his past four.

Over the last few years, McGregor has had several run-ins with the law, including one at Barclays Center. In April 2018, McGregor and 20 men stormed the Barclays loading dock after a UFC media day in search of McGregor rival Khabib Nurmagomedov. During that altercation, McGregor threw a metal dolly through the window of a bus filled with UFC fighters. He was arrested on charges of assault and criminal mischief. McGregor took a plea deal and was ordered to do community service and take an anger management course.

Actress Raven Goodwin Dropped Her Fire Wedding Pictures On Our

Fact-check: Are vaccinated people dying at a faster rate than

I changed my mind on rent control

Massachusetts man gets new heart and gifted ‘get well’ card

Actress Raven Goodwin Dropped Her Fire Wedding Pictures On Our