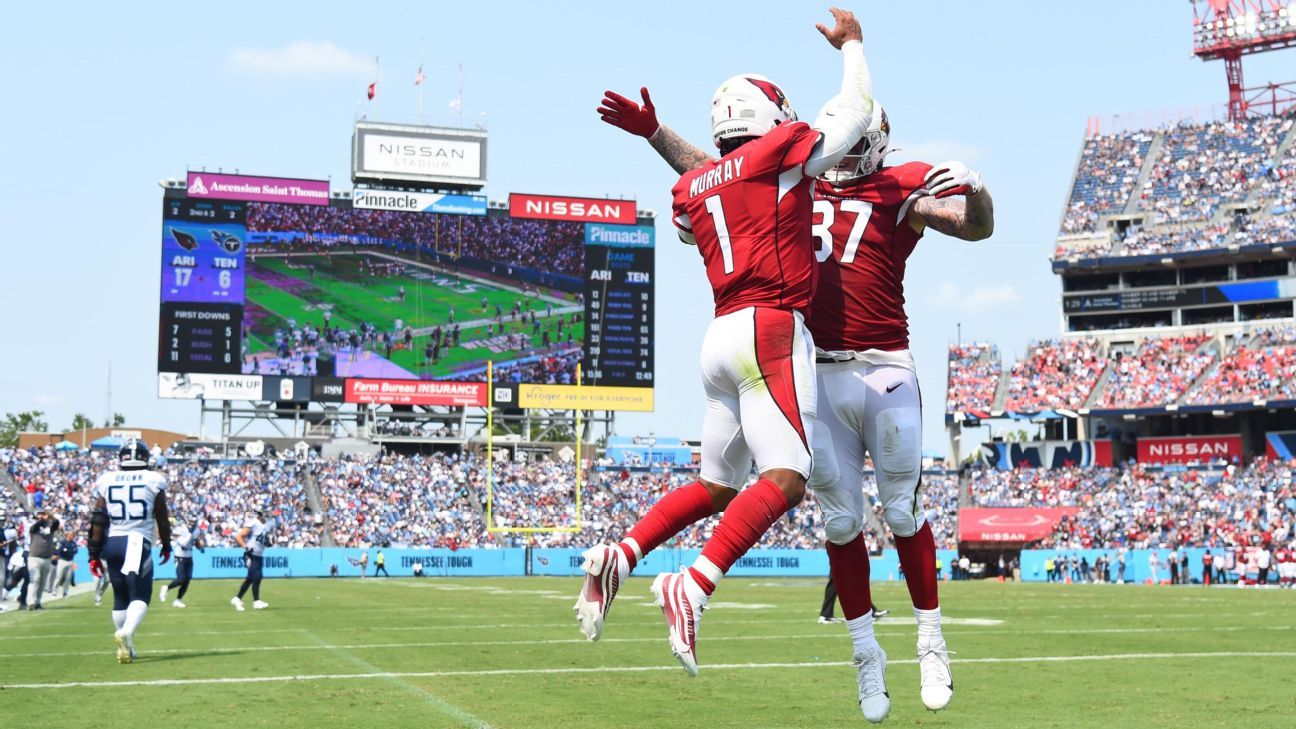 Murray basically did what he wanted and when he wanted against the Tennessee Titans, throwing for four touchdowns and running for a fifth during a 38-13 season-opening rout.

Murray looked like a newer version of the quarterback he was in the first half of last season when Arizona started 5-2. He ran when needed, making defenders miss and finishing plays with his feet. That’s the Murray the Cardinals will need for the entire season if they want to be considered a serious contender. Last season Murray injured and then reinjured his shoulder midway through the year, and even though he played through the pain, he was limited and the Cardinals closed the season going 3-6, leaving them out of the playoffs.

Murray was not limited Sunday.

“Man, he won the game,” wide receiver DeAndre Hopkins said. “At the end of the day, it says W or a loss. He had five touchdowns. He prepared like he was going to have five touchdowns. He demanded everybody else to be on their A-game. When we messed up, Kyler was the first one on us. I expected that out of him the way he’s prepared this offseason.”

Murray showed development, checking into two of his touchdown throws, one to Hopkins and one to Christian Kirk, Kingsbury said. The Titans were playing Cover 0 and Murray recognized it.

“He was locked in, understood the game plan and really executed well,” Kingsbury said.

By going to Nashville and having its way with the Titans — offensively and defensively — Arizona established itself as a real threat in a loaded NFC West. The Cardinals said they heard the naysayers all during the offseason that they couldn’t reach the playoffs coming out of their division.

“We all hear it,” Kirk said. “And I think for us, you tend to tell yourself, ‘Oh, don’t listen to it,’ but for us, we want to be great. We want to be recognized as one of the better teams. Like I said, this is a great win. It feels good, but it’s only one game and we still have a lot of work to go.

“I haven’t seen this team with such a big chip on their shoulder before in years past of my three seasons of being here so far.”

For at least one week, the Cardinals’ offense met the offensive expectations established when Kingsbury was hired in 2019. It only took three seasons. With winnable games against the Minnesota Vikings and Jacksonville Jaguars over the next two weeks, Arizona could find itself 3-0 before back-to-back NFC West contests against the Los Angeles Rams and San Francisco 49ers when they can further prove those naysayers wrong.

‘I was wrong’: Why MLB’s restructuring of the minors turned out mostly better than expected

‘I think we have a goalie here’: Henrik Lundqvist’s journey from seventh-rounder to Rangers legend

Nikki Haley says Biden should ‘step down and take Kamala

Child Abuse Deaths Increased Among Black Children During The Pandemic

‘Assault’ Review: A Deconstructed, Deadpan Thriller of Coal-Black Comedy and