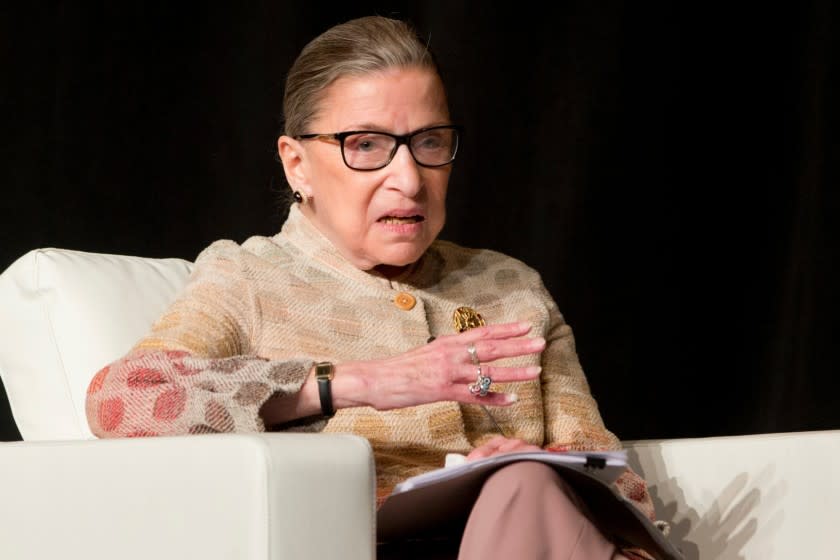 Justice Ruth Bader Ginsburg spoke softly, so quietly in a crowded social gathering that I had to lean in to hear her.

But it was always a good idea to listen closely to what she said.

Shortly after Justice Elena Kagan joined the court in 2010, I saw Justice Ginsburg, who had been confirmed in 1993, at a holiday party at the court and asked her about her newest colleague.

Ginsburg brightened up and said they had started going to the theater together. They had just seen a revival of “Oklahoma!” with a Black cast, and she recommended it highly.

I admitted I had not seen it yet, and made a lame joke about wondering whether composer Richard Rodgers or lyricist Oscar Hammerstein, the most famous duo in American musical theater, had ever been to Oklahoma.

Ginsburg said she had lived in Oklahoma more than half a century ago and remembered it well — but not fondly.

Supreme Court, Ruth Bader Ginsburg and her husband Martin Ginsburg, pose for a photo in Fort Sill, Okla., when Martin was serving in the U.S. army at Artillery Village. (Supreme Court of the United States via AP)

In 1954, she and Marty Ginsburg graduated from Cornell University, were married that summer and moved to Fort Sill, in southwest Oklahoma, where he was attending an Army officers’ training program.

“I remember all the signs. ‘Whites only’ and worse. On stores. Along the road,” she told me in that soft voice. The brutality of racism “was very open.”

It was also at Fort Sill where she first encountered blatant sex discrimination.

She had qualified for a job as a claims adjuster for the Social Security Administration. But a male supervisor said she would be paid at a lower rate than what men received because she was pregnant and might not be able to travel.

This was two years before she enrolled at Harvard Law School, one of only nine women, and a dean asked why women were taking slots that could go to men.

And it was well before she graduated first in her class at Columbia Law School (she followed Marty to New York as well), but could not find a job at a New York law firm or in a judge’s chambers.

And it was long before she co-founded the Women’s Rights Project at the American Civil Liberties Union in 1972 and began taking sex bias cases to the Supreme Court.

Ginsburg’s legacy as a champion of women’s rights has drawn the most attention and praise in her passing, but her clerks and the other justices remember her as an extraordinarily hard worker.

They recall her going to restaurants or the theater, and at slow moments, pulling a little flashlight from her purse to read briefs or memos .

She was a lawyer’s lawyer — precise and careful with her words, whether speaking or writing. She worked everywhere and late into the night. Reading briefs and revising and editing draft opinions.

Even in her 80s, as she grew more frail and battled recurrent bouts of cancer, Ginsburg could be counted upon to always ask some of the most penetrating questions during oral arguments.

In conversations public and private, Ginsburg often spoke of bias and discrimination — of how it persisted, even if it was not as blatant as in times past.

She was attuned to unfairness, bias and inequality, and she was sometimes frustrated that her colleagues — graduates of elite private schools and Ivy League universities, as she was — seemed blind to it.

This difference of perception played out in a major battle over voting rights.

“Things have changed in the South,” Chief Justice John G. Roberts Jr. wrote in 2009, shortly after Barack Obama became the first Black man to win the White House, arguing the landmark Voting Rights Act of 1965 was outdated and unnecessary.

In 2013, the Supreme Court’s conservatives by a 5-4 vote struck down a key part of the law that blocked the Southern states from making changes in their election procedures and voting rules if doing so might discriminate against Black and Latino voters.

Ginsburg was not impressed with this Pollyanish thinking.

The “scourge of discrimination” has not gone away, she wrote in dissent, even if it had gone into hiding. Moreover, Congress had voted overwhelmingly to keep the law in place, she said.

Her dissent in the Lilly Ledbetter case sounded the same theme.

She was dismayed and irked that the court by a 5-4 vote tossed out a sex discrimination claim from an Alabama woman who had been paid far less than her male colleagues.

The majority said Ledbetter waited too long to sue. The “realities of the workplace” are that salaries were kept confidential, Ginsburg said. How does that justify throwing out her claim?

The day before her death Friday, she sent a letter of thanks to the National Constitution Center in Philadelphia, which had awarded her the Liberty Medal.

It was her last public statement, and it captured her modesty, her intelligence and her generosity.

“It was my great good fortune to have the opportunity to participate in the long effort to place equal citizenship stature for women on the basic human rights agenda,” she wrote.

“In that regard, I was scarcely an innovator. For generations, brave women and enlightened men in diverse nations pursued that goal, but they did so when society was not yet prepared to listen.”

“I was alive and a lawyer in the late 1960s and the decade commencing in 1970. Conditions of life had so changed that audiences responded positively to pleas that society — men, women, and children — would be well served by removing artificial barriers blocking women’s engagement in many fields of human endeavor — from Bar membership to bar tending, policing, firefighting, piloting planes, even serving on juries.”

“Helping to explain what was wrong about the closed door era was enormously satisfying,” she concluded.