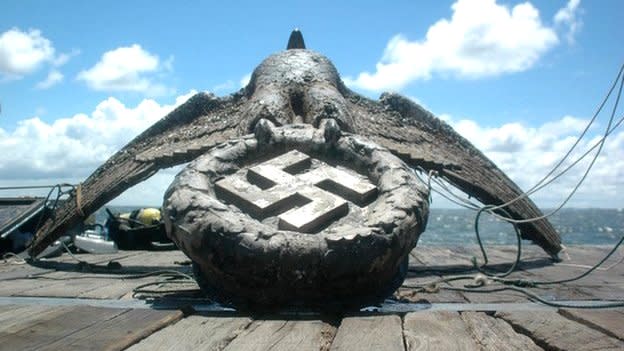 A large bronze eagle with a swastika under its talons soon to be auctioned in Uruguay should go to a museum or educational institute, a US Holocaust research centre is urging.

It should not be allowed to fall into the hands of white supremacists, the Simon Wiesenthal Center warns.

It was recovered by private investors from the waters off Uruguay in 2006.

The object was part of the stern of the Graf Spee, which was scuttled by its crew off the coast of Uruguay’s capital, Montevideo, in 1939.

It now sits in a warehouse owned by the Uruguayan government after a long battle over who can claim ownership.

In 2014, the Supreme Court decided that if the eagle were ever to be sold, the profits should be divided between the Uruguayan state and the private salvage company that paid for its recovery.

Last year, a court in Uruguay ruled that the eagle should be auctioned off.

Now, the Simon Wiesenthal Center in Los Angeles is urging Uruguay to instead use the object to serve “as a warning to future generations”.

The museum also referred to “sick trafficking” of the eagle, mentioning an alleged inquiry from an investor who wanted to use it as a centrepiece at the 2020 Fifa World Cup in Qatar.

The centre added that museums or educational institutes that would use the eagle to educate about the Holocaust or other genocides should be given preference in the auction.

It is the latest turn in the history of the controversial object, which was once one of the most ostentatious symbols of Hitler’s Third Reich.

When the two-year salvage effort concluded in 2006, the swastika was covered by a cloth as the eagle was transported from the ship to a warehouse out of respect for those might be offended.

Uruguay hoped it could become a tourist attraction and it was briefly put on display in Montevideo.

However, the German embassy complained and asked the government to cease exhibiting “Nazi paraphernalia”.

Cuomo Announces Round 4 Winner of the Genius NY UAS Competition

Cuomo Announces Round 4 Winner of the Genius NY UAS Competition