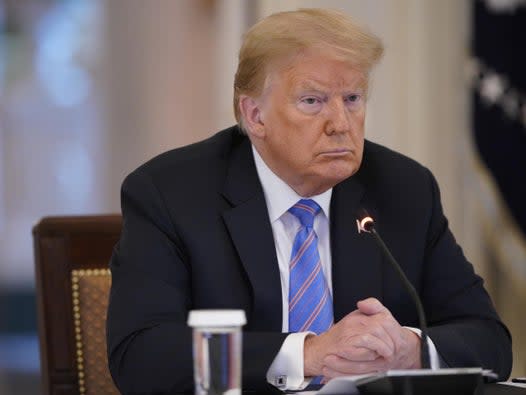 The White House has denied reports that Donald Trump ignored a warning from US intelligence that the Russian military had offered bounties to Taliban-linked militants in Afghanistan to kill American troops and other coalition forces.

The New York Times reported the claim on Friday, triggering a storm of accusations that the president had failed to protect US and allied troops, including those from Britain.

Citing officials briefed on the matter, the Times said the US determined months ago that a Russian military intelligence unit linked to assassination attempts in Europe had offered rewards for successful attacks last year.

Islamist militants, or armed criminal elements closely associated with them, are believed to have collected some bounty money, the newspaper said. The White House, the CIA and the Office of the Director of National Intelligence initially declined requests from Reuters for comment on the report.

On Saturday afternoon, the White House denied Mr Trump had been briefed on the matter, but did not dispute that US troops were being targetted, something likely to give the story further life.

“The United States receives thousands of intelligence reports a day and they are subject to strict scrutiny. While the White House does not routinely comment on alleged intelligence or internal deliberations, the CIA Director, National Security Advisor, and the Chief of Staff can all confirm that neither the President nor the Vice President were briefed on the alleged Russian bounty intelligence,” press secretary Kayleigh Mcenany said in a statement.

“This does not speak to the merit of the alleged intelligence but to the inaccuracy of the New York Times story erroneously suggesting that President Trump was briefed on this matter.”

See below to see how the drama played out:

Please allow the blog a moment to load

Watch Judi Dench Shake Her Hips For an Adorable TikTok With Her Daughter and...

Best soundbars with Amazon Alexa in 2020