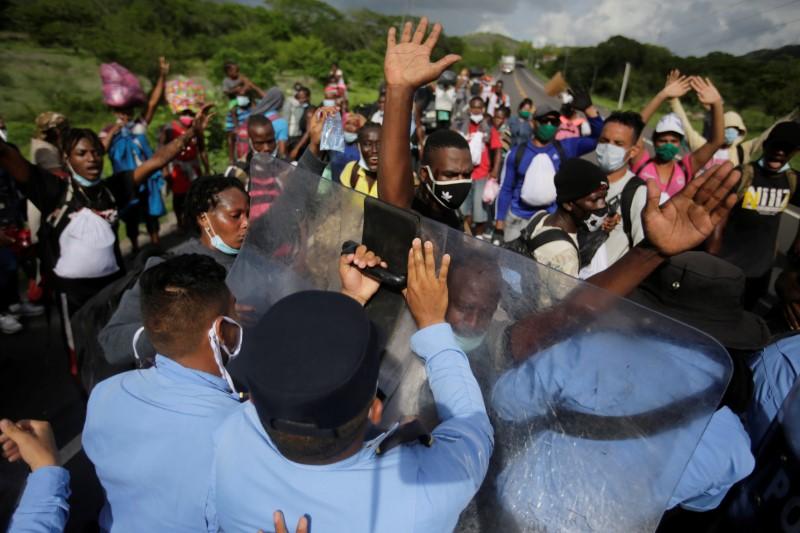 TEGUCIGALPA (Reuters) – African, Cuban and Haitian migrants stranded in Honduras after borders were closed due to the coronavirus pandemic began trekking northward on Tuesday in an attempt to reach the United States, migration authorities said.

Migrants from Africa, Cuba and Haiti, who are stranded in Honduras after borders were closed due to the coronavirus disease (COVID-19) pandemic, scuffle with police officers while trekking northward in an attempt to reach the U.S., in Choluteca, Honduras June 2, 2020. REUTERS/Jorge Cabrera

Young men and women carrying backpacks along with children wearing face masks walked along a highway in southern Honduras near Nicaragua, television images showed, although it was not clear how many people were in the group.

An activist in the town the group left from said 102 had started out in the morning, including a dozen Cubans. Lizandro Vallecillo, a spokesman for the national migration institute, said he counted 50 people from television images.

Vallecillo said the migrants were among some 260 people in migrant shelters in the southern Honduras city of Choluteca since mid-March, when Honduras and neighboring El Salvador and Guatemala closed borders in an effort to contain the coronavirus.

“They were in Choluteca but decided to leave in a caravan. They are aiming to reach the border with Guatemala on the way to the United States,” he said.

Jimmy Aguilera, an activist with civil society group ACI-PARTICIPA in Choluteca said police had stopped them at a road block in a nearby town called El Marillal.

“They are asking to be given safe passage,” he said.

African, Haitian and Cuban migrants have been stranded at several points in Central America since the pandemic interrupted global mobility.

In Panama, which currently has about 2,400 such migrants, 59 people at migrant shelters in the Darien province, on the edge of a remote jungle separating Panama and Colombia, tested positive for the coronavirus.

Honduras currently allows only cargo trucks in and out of the country.

A curfew first imposed in March is still in place, as the country on Monday registered 5,362 total infections and 217 overall deaths.