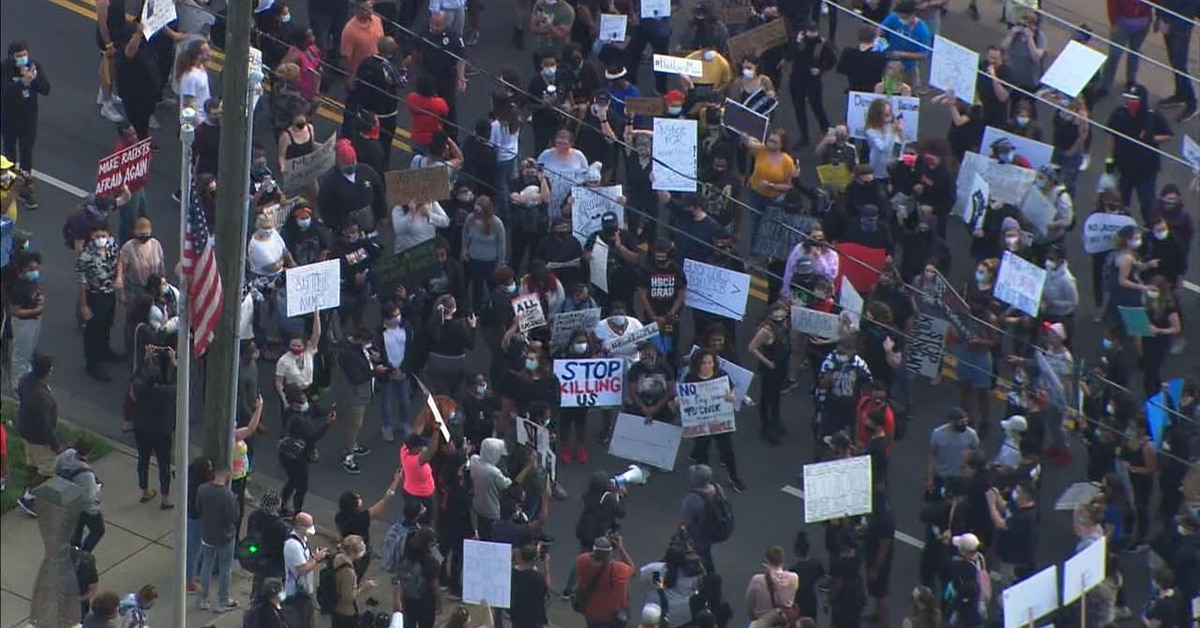 The protest was over the death of 46-year-old George Floyd, a black man who died at the hands of the Minneapolis police after being detained for questioning regarding a possible forgery in progress.

The officer who arrested Floyd, Derek Chauvin, was fired and charged with third-degree murder and manslaughter. The three other officers involved in Floyd’s death were also fired, but no charges have been filed against them at this point.

People started to gather around 6:30 p.m. for a peaceful protest but it quickly escalated later in the evening.

Protesters were seen throwing rocks at police and police fired pepper spray bullets to break up the crowds.

From Chopper 9 Skyzoom over Beatties Ford Road, our crew could see a line of police geared up and making arrests as protesters became aggressive toward them.

Less than a mile down the road, Channel 9 saw crowds at the University Park Shopping Center.

People smashed windows and went into a few stores such as a cell phone store and a Food Lion, causing a lot of damage and looting.

Channel 9′s veteran crime reporter Glenn Counts was on scene and said police had a special unit go out before all the unrest to speak with protesters earlier in the evening in an attempt to keep violence from happening.

But Glenn reported the protesters wanted nothing to do with the police unit. In fact, they got a hold of a CMPD officer’s bike at one point.

Putney expressed how unhappy he is about the situation in Minneapolis and how it is a black eye on the law enforcement profession.

CMPD said each of the people who were arrested were given several orders to disperse.

Winston was charged with failure to disperse on command.

Winston has since been released. In a statement on Twitter, Winston said,”I am home safe. Thank you all for your support. There are a lot of people that are still in the process. There is a lot of work to do.”

Winston’s fellow councilmember Larken Egleston tweeted about the protests saying, “I love you, Charlotte — please stay safe. Change must come, justice must be served and people must be heard. Do not allow tragedy to beget more tragedy though.”

Councilmember Malcolm Graham spoke to Channel 9 and described the protests as “anarchy.”

Mayor Vi Lyles was not happy to see what happened along Beatties Ford Road Saturday night, but said there is a lot of hurt over what happened in Minneapolis.

“I also have a complete understanding of the frustration and the anger and the sadness of the people that are protesting,” Lyles said. “I know that sometimes it’s hard to watch and it’s violent and I wish that wouldn’t happen, but I do understand it. The police has got to look at how do we officers really understand the hurt that we’ve had for years in our communities of poverty and race.”

CMPD said three officers were hurt during Friday night’s protests, but they are all expected to be OK. A police bicycle and several CMPD patrol cars were also damaged.

Protests are planned in areas outside of Charlotte Saturday — one in Rock Hill at 11 a.m. and one in Salisbury at 4:30 p.m.

What we know about George Floyd, the man killed in Minneapolis police custody