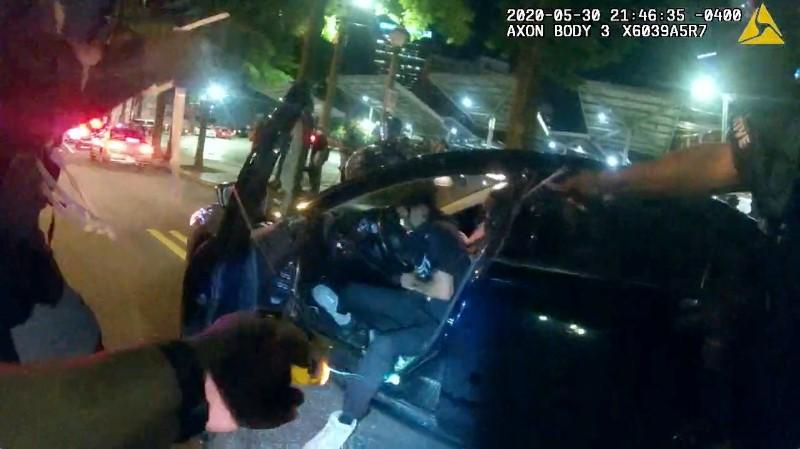 (Reuters) – Six Atlanta police officers will face charges for an incident in which they tased two college students and removed them from their car during protests over the death of George Floyd, an unarmed African American in police custody.

Fulton County District Attorney Paul Howard said on Tuesday he would seek prison sentences of several years for the officers involved in the Saturday encounter with Messiah Young, 22, and his 20-year-old girlfriend, Taniyah Pilgrim.

“The conduct involved in this incident — it is not indicative of the way that we treat people in the city of Atlanta,” Howard told a briefing, which Young and Pilgrim also attended.

Video footage shared at the briefing showed officers stopping the car, relaying orders and firing a taser gun into the vehicle. Pilgrim is then pulled from the car screaming. There is no sign that either resisted or posed any threat.

Atlanta Mayor Keisha Lance Bottoms said on Sunday that she and the city’s police chief had decided to fire two of the officers after reviewing body-camera footage of the incident.

The Atlanta Police Department did not respond to a request for comment on the charges, which range from aggravated assault to criminal damage to Pilgrim’s car.

“I feel a little safer now that these monsters are off of the street,” said Young, a senior at Morehouse College, who suffered a fractured wrist during the incident. “Moving forward, we just need to make sure that all officers are held accountable.”

Vince Champion, southeast regional director for the International Brotherhood of Police Officers, said the move to bring charges without a thorough investigation was unfair to the officers, none of whom have been interviewed.

“We believe that this is premature,” Champion said, adding he believed Howard and Bottoms were trying to score political points rather than uncover all the facts. “Why were the students stopped? We don’t know the answer to that.”