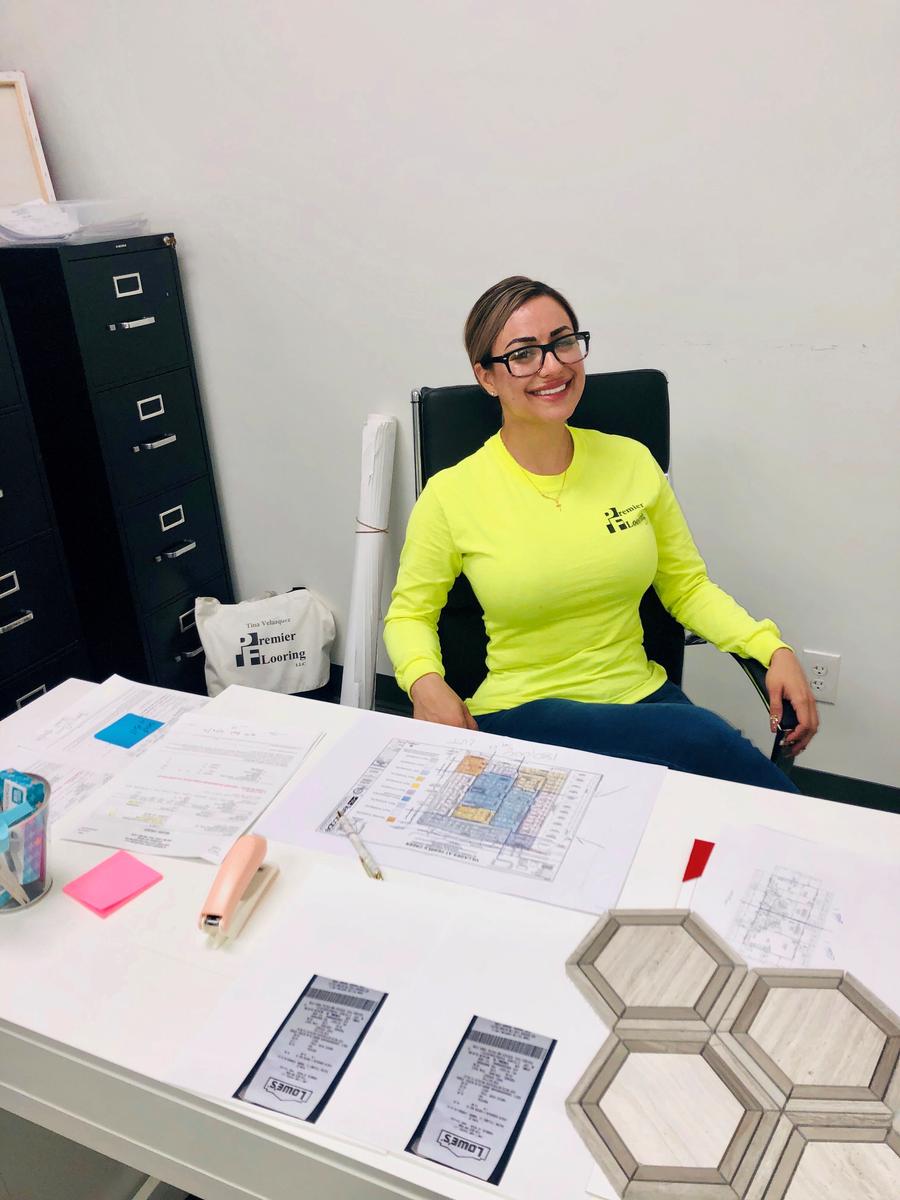 WASHINGTON (Reuters) – Guadalupe Velazquez has a college degree, owns a flooring company and is pregnant with a baby girl due next month.

Guadalupe Velazquez, who is currently living in a halfway house while serving a marijuana charge and due to have a baby in June, poses at her office in an undated photo, in Tempe, Arizona, U.S. Courtesy of Michelle Velazquez/Handout via REUTERS.

Velazquez, 30, is also terrified of contracting COVID-19 in the Phoenix halfway house where she is serving her sentence on a decade-old marijuana conviction in federal court in Arizona, according to her sister and her fiance.

“They didn’t give her a mask until she complained. … When they go into her room, sometimes they have masks and gloves, and sometimes they don’t,” her sister, Michelle Velazquez, said by telephone. “She is worried about getting COVID because these people don’t take any precautions.”

As COVID-19, the respiratory disease caused by the novel coronavirus, spreads through the U.S. prison system, Velazquez’s family sees worrisome signs. A nearby halfway house run by the same company has reported a COVID-19 case, and Velazquez’s pregnant roommate was transferred from a Texas prison where another pregnant woman died of COVID-19.

Alix McLearen, the bureau’s senior deputy assistant director for reentry services, said the agency has loosened restrictions in order to move 19 pregnant or postpartum women into programs at halfway houses for expectant mothers, and five into home confinement as of May 18.

Another nine such women remain in prison. Of those, three who recently gave birth are in a parenting program that houses them with their babies.

“I’m proud of this,” McLearen said, referring to the number of pregnant inmates moved out of prisons.

McLearen said the bureau has made appropriate decisions on placement for each woman.

“If Paul Manafort is vulnerable, then so is every pregnant woman,” said Kevin Ring, who leads the non-profit organization Families Against Mandatory Minimums.

Concerns about pregnant women’s safety in prisons and halfway houses have intensified since federal inmate Andrea Circle Bear died of COVID-19 last month several weeks after giving birth to her baby while on a ventilator.

The U.S. Centers for Disease Control and Prevention has said pregnant women have “a higher risk of severe illness when infected with viruses that are similar to COVID-19.”

Congress has given federal prison authorities more discretion to send inmates home during the pandemic.

“The BOP clearly has the authority to move these women to home confinement,” said Doug Miller, a federal public defender in Maryland.

A judge previously vacated Velazquez’s conviction based on ineffective counsel but she was ordered back into custody in December after the Justice Department declined to drop the case.

Velazquez’s family shared details about her story with Reuters, citing concerns that Velazquez might get in trouble if she speaks out about the halfway house’s conditions.

The women use communal areas to do their laundry and make phone calls, are prohibited from using bleach or hand sanitizer and employees can enter their apartments any time, Velazquez’s family said.

McLearen said the programs are practicing social-distancing and protective mask-wearing.

Carlos Hernandez, Velazquez’s fiance, said he is baffled why she cannot come home, especially because another person convicted in the same case already has been released on home confinement.

“What they are doing to her,” Hernandez said, “is an injustice.”