(CNN)Four women identified as Jane Does filed a lawsuit against disgraced movie mogul Harvey Weinstein Thursday, alleging he sexually assaulted them. The allegations include the story of one woman who says Weinstein raped her in 1994 when she was about 17.

The lawsuit also names as defendants Weinstein’s brother, Robert Weinstein, their company Miramax and Disney, which owned Miramax for a time. The suit alleges Robert Weinstein and other executives and employees turned a blind-eye to the alleged abuses and some were complicit in facilitating some encounters.

Harvey Weinstein, 68, is currently serving a 23-year prison sentence for his conviction in New York for charges of criminal sexual act and rape. Through his attorney, he denied the latest allegations.

“In any event, some of these claims, including those alleged to have occurred in the 1980s and 1990s, may be barred by the applicable statute of limitations, and not subject to any exceptions under the law, as these plaintiffs do not appear to be complainants in Mr. Weinstein’s criminal case,” Ansari added.

Similar to previous accusations against Weinstein, the four “Jane Does” say Weinstein used his position of power and threatened to ruin their careers in the entertainment industry if they exposed the alleged assaults.

A woman identified as Jane Doe II, now 43, alleges she met Harvey Weinstein in a hotel room in 1994 for what she thought was a business meeting when she was approximately 17 years old.

A nearly naked Weinstein greeted her at the door and despite her rebuffs he forced her to perform oral sex and then raped her, the lawsuit says. Weinstein took her driver’s license before he let her leave the room, threatening to ruin her career and physically harm her and her family, according to the lawsuit.

Jane Doe 1 alleges Weinstein lured her back to a suite at the Hotel Barrière Le Majestic during the Cannes Film Festival in France in 1984, when she was about 34, according to the lawsuit. The suit says he jammed his tongue into her mouth and groped her breasts and genitals before she escaped.

Jane Doe 3 was about 26 in 2008 when she met Weinstein at Cipriani’s Restaurant in New York City, the lawsuit says. The Hollywood producer told her that he’d set up a meeting through his secretary. A few days later under the guise of a business meeting at his SoHo apartment, Weinstein raped the woman and threatened to “come after her” if she told anyone about the assault, the lawsuit alleges.

Weinstein trapped Jane Doe 4 in a hotel suite in 2013, the lawsuit alleges, when she was about 28 and attending the Venice Film Festival. She brought a friend with her that night but Weinstein asked the friend to leave and ultimately forced the woman to perform oral sex on him, the lawsuit alleges. She became fearful Weinstein would end her career if she came forward and decided not to come forward then, the suit says. 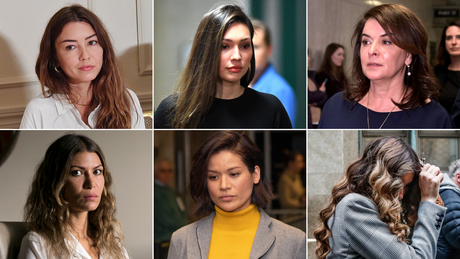 These are the women who testified against Harvey Weinstein

The lawsuit filed by New York attorney Jordan Merson seeks monetary compensation from all of the named defendants for medical expenses and the emotional suffering the Jane Does have endured.

“Disney owned Miramax, Miramax paid settlements to multiple women who were victims of Harvey Weinstein’s sexual abuse. Based on Disney’s control of Miramax finances, Disney knew or should have known of these payments, which should have prompted additional inquiry and investigation,” the lawsuit alleges.

CNN has reached out to Disney, Miramax and Weinstein’s brother Robert for comment on the lawsuit.

Weinstein still faces criminal charges of sexual assault in Los Angeles, and he has previously denied the allegations.