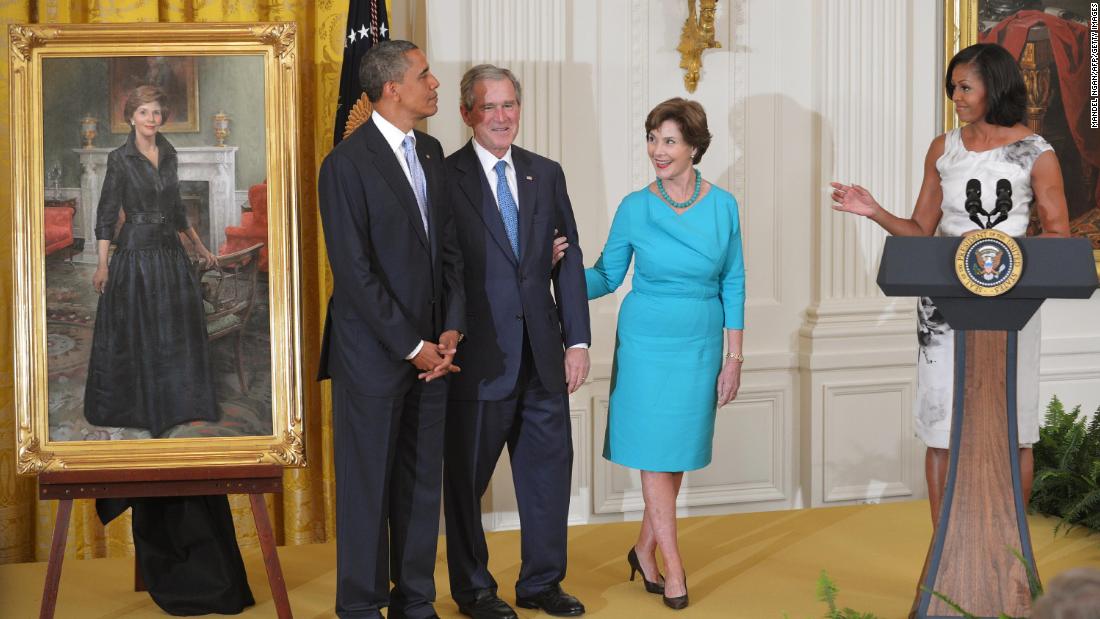 The White House Historical Association, the private nonprofit organization founded in 1961 by Jacqueline Kennedy to care for historic elements of the White House, on its website describes the presidential portrait unveilings as “often bi-partisan events with warm greetings and collegial speeches exchanged by the president and their predecessor.”

The relationship between Trump and Obama, especially of late, has been quite the opposite of “warm” and “collegial.” Trump has accused Obama of criminal activity; Obama has made thinly veiled jabs at Trump’s leadership. Despite initial talks between the current administration and its predecessor to pick a date this spring for the portrait event, communication has now broken down to the point of indefinite postponement.

Presidents have commissioned portraits of themselves to hang in the White House since George Washington. In fact, it is Washington’s portrait that has one of the most significant pieces of history tied to it — first lady Dolley Madison saved it in 1814 when the British set fire to the White House during the War of 1812.

Since Washington, be they seated or standing or posed with a smile or a stern visage, every president has been painted in portraiture to be hung in the White House. 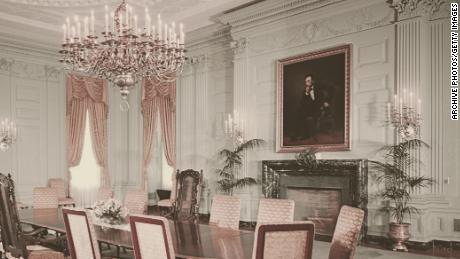 A portrait of former President Abraham Lincoln by George Peter Alexander Healy hangs above the fireplace in the State Dining Room in the White House in 1962.

One of the most famous is the George Peter Alexander Healy painting of Abraham Lincoln. However, when the portrait was ultimately completed by Healy in 1869 and sent to the White House to be added to the collection, President Ulysses S. Grant “didn’t find it suitable,” according to the White House Historical Association, and selected another Lincoln portrait for the White House instead. The Healy painting thus went to Lincoln’s oldest son, Robert Todd Lincoln, who purchased it. More than 70 years later, having been passed down through family, the Healy portrait eventually made its way back to the White House, under President Franklin Roosevelt. Since 1939, it has almost always remained, with few exceptions, in its current place in the State Dining Room. 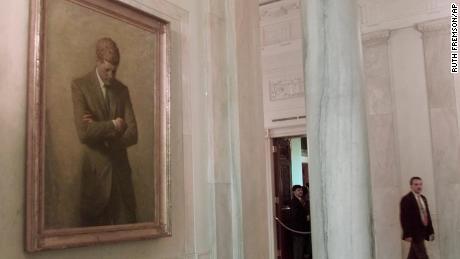 A portrait of former President John F. Kennedy hangs in the main foyer of the White House in January 1998.

John F. Kennedy’s portrait, by the artist Aaron Shikler, was done in 1971, years after Kennedy’s assassination. Without a living subject to pose for him, Shikler took guidance from Kennedy’s widow, whose only stipulation, Shikler once said, was that she didn’t want her late husband to “look the way everybody else makes him look, with the bags under his eyes and that penetrating gaze. I’m tired of that image.” What Shikler ended up finishing is perhaps the most iconic presidential portrait in the White House — Kennedy is looking down, his arms crossed, appearing deep in thought. Shikler has said he wanted to show Kennedy as a thinker because “a thinking president is a rare thing.” Shikler would later paint the official portrait of first lady Nancy Reagan. 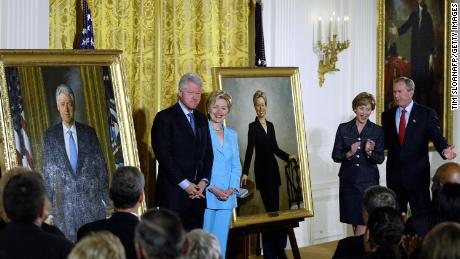 The process of creating the official White House presidential portraits, which are different than those commissioned for museums — such as the two the Obamas donated to the National Portrait Gallery — now typically begins with the White House Historical Association, which helps guide the sitting president and first lady to a preferred portraitist and lays out a rough time frame. Once an artist is selected, during a president and first lady’s tenure, the look and feel of each painting — the pose and the aesthetic — is discussed.

Sittings for the work almost always occur after the first couple has left the White House. Thus, unveiling events happen under the leadership of the following president and first lady, providing not only an opportunity for the foursome — past and current leaders — to be in the same room, but for the previous first couple to return to their old home — a visit that would have little reason to occur without the portraits. 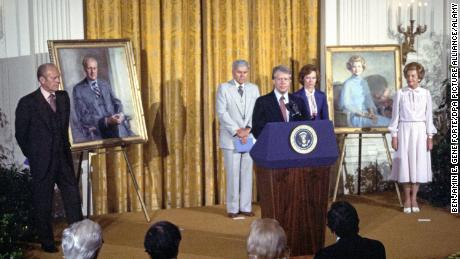 President Jimmy Carter makes remarks at the unveiling of the portraits of former President Gerald R. Ford and former first lady Betty Ford in the East Room of the White House in August 1980.

Since Jimmy Carter, who opted not to have an unveiling ceremony for his own portrait — though he did unveil the portrait of his predecessor, Gerald Ford — living presidents have been present during the formal portrait unveilings, as have the corresponding first ladies, whose official portraits are revealed at the same time. Often, acrimony from a difficult campaign or opposing political views are set aside as the two couples take the riser in the East Room for respectful remarks. Or, as the case was for Ronald Reagan and George H.W. Bush, the memories of camaraderie. When the Bushes hosted the Reagans for their unveiling, Bush joked that when the announcer at the event said, “Mr. President,” Bush almost automatically went to stand in the back of the room, as he had done for the previous eight years as Reagan’s vice president. For his part, Reagan, at the 1989 event, expressed his gratitude upon returning to the White House. “There are no words to convey what it means for Nancy and me to be here, to walk in these hallowed halls again,” he said. 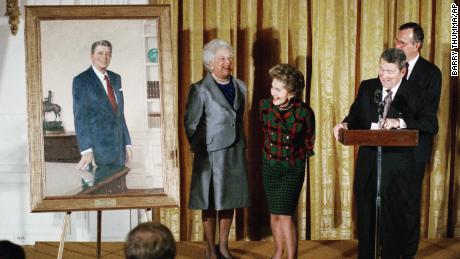 Former President Ronald Reagan and former first lady Nancy Reagan take a peek at a portrait of the former president along with then-President George H.W. Bush and then-first lady Barbara Bush during an unveiling ceremony at the White House in November 1989.

The same sentiments were expressed years later by George W. Bush, whose return with wife Laura Bush was curated with great care by Michelle Obama, who, according to author Kate Andersen Brower’s new book, “Team of Five,” told her aides the event and the accompanying meal “needs to be perfect.” Brower writes of the details Obama had made for the visit, the “long table set in the elegant Red Room, on the State Floor, for the Bushes’ large extended family. Fourteen Bushes had a meal together and were served by the same butlers who had attended to them for years in the upstairs residence.”

During the ceremonial unveiling, Barack Obama recounted in his speech that Bush was the first person he called when he learned in 2011 that American forces had killed Osama bin Laden. “Protecting our country is neither the work of one person nor the task of one period of time. It’s an ongoing obligation that we all share,” Obama said. 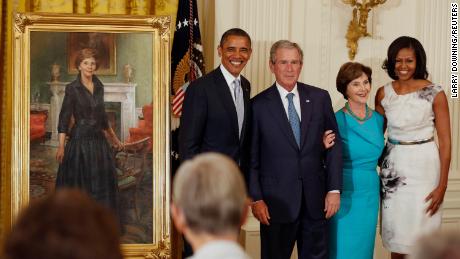 The event was also a glimmer of the fun friendship that was burgeoning and would later solidify between Bush and Michelle Obama. Acknowledging the Washington portrait Dolley Madison had saved from the fire, Bush in his remarks that day said, “Now, Michelle,” pointing to his painting, “if anything happens, there’s your man.”

Brower recounts the congeniality of that day, writing in her book, “Laura Bush was in on the lighthearted event and said, ‘Nothing makes a house a home like having portraits of its former occupants staring down at you from the walls.’ Years before, when Laura Bush gave Michelle Obama her first tour of the White House,” Brower writes, “she was eager to assure Michelle that a life could be made there for her daughters. During that first meeting, Laura took her hands and said, ‘Please call me Laura.’ Bush 43, Michelle recalled, had ‘a magnanimous Texas spirit that seemed to override any political hard feelings.'”

Political hard feelings are likely what could kill the presidential portrait tradition, which regardless of the frosty emotions Trump has for his predecessor, would likely have been canceled during this time period anyway because of the coronavirus pandemic. The question now remains whether the spirit of good faith between presidents, be they once friend or foe, can overcome the current political landscape and put a date on the calendar.

As Brower writes, Trump doesn’t mind not being a part of the elite, tight-knit club of the remaining former American leaders. He told her during their interview last spring, “I’m a different kind of President.”