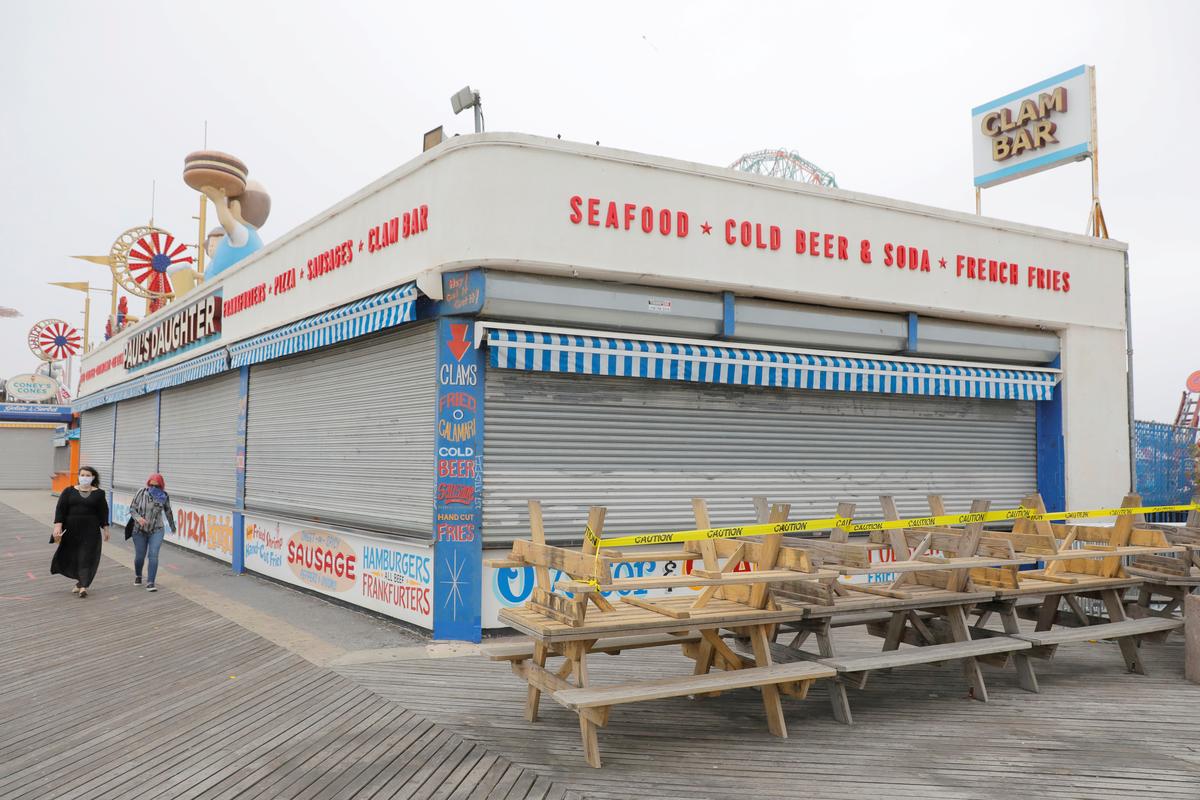 NEW YORK (Reuters) – Memorial Day weekend, which culminates in gatherings to honor U.S. military dead, got off to a cautious start on Saturday, especially in rain-soaked New York, epicenter of the coronavirus crisis that has now killed more Americans than the Vietnam and Korean wars combined.

FILE PHOTO: People walk by a closed restaurant on the boardwalk at Coney Island beach ahead of the Memorial Day weekend following the outbreak of the coronavirus disease (COVID-19) in Brooklyn, New York City, U.S., May 22, 2020. REUTERS/Andrew Kelly

A day after New York Governor Andrew Cuomo allowed up to 10 people to attend ceremonies honoring America’s military veterans, he took time at his news briefing on Saturday to warn that social distancing and face masks should be part of any plans to get together.

Gatherings of up to 25 people were being allowed outdoors in New Jersey, although Governor Phil Murphy on Friday warned that the loosened restrictions don’t apply to outdoor dining or school graduations, which should remain under 10 people with social distancing.

While the Memorial Day holiday is Monday, the weekend leading up to it marks the unofficial start of summer, with Americans traditionally flocking to beaches, gathering at backyard barbecues and unfurling picnic blankets in parks.

Among those soaking in the sun and enjoying a bit of travel on Saturday was President Donald Trump, who was seen golfing at his Trump National club in northern Virginia, his first golf outing since the White House declared a national emergency over the coronavirus outbreak in March.

Heavy rain kept crowds down at state beaches in New York, New Jersey and Connecticut, which were re-opened with governors urging outdoor enthusiasts to maintain at least the recommended six-foot distance apart to stop the virus spread.

Some town and county beaches on Long Island and Westchester County or along the Jersey Shore’s 130-mile coastline remained closed to anyone but local residents, with some local officials concerned about being flooded by New Yorkers after Mayor Bill de Blasio decided to keep city beaches closed for swimming.

Surprise openings of other outdoor sites thrilled Americans cooped up at home by pandemic lockdown rules.

COVID-19, the disease caused by the coronavirus which has killed more than 338,000 people worldwide, has left more than 96,400 dead in the United States.

Iowa had a record increase in deaths on Saturday, as did Minnesota and Rhode Island earlier this week, according to a Reuters tally.