Health officials expressed growing alarm on Wednesday that the coronavirus is spreading quickly in tightly knit Hasidic Jewish communities in Brooklyn, saying that they are investigating a spike in confirmed cases in recent days.

More than 100 people have recently tested positive for the coronavirus in Borough Park and Williamsburg, two Brooklyn neighborhoods with sizable Hasidic Jewish populations — all of them tested at two urgent care centers that have been crowded with anxious patients, according to an urgent care center employee.

The tests were conducted at Asisa Urgent Care facilities in each neighborhood, and the results were all received by the end of the day on Tuesday.

On Tuesday, Mayor Bill de Blasio said the city would begin to increase its testing capacity from the current level of several hundred tests a day. The increase would start on Thursday, with the expectation of reaching the goal of 5,000 tests a day after “several days,” he said.

At a news conference on Tuesday, Mr. de Blasio said there were no known clusters of coronavirus in the city. A cluster is an interconnected group of cases that can be traced to the same source. Such a group emerged in New Rochelle this month.

“If we had a cluster, I assure you, we would tell you,” the mayor said. “I asked this very day, we do not have any clusters in New York City.”

But the positive tests in Brooklyn were all conducted before the gradual expansion could be implemented, which has raised concern that they may be the city’s first cluster rather than a reflection of increased testing.

A spokeswoman for the mayor said late Wednesday that the city’s health commissioner, Oxiris Barbot, had reviewed the Borough Park cases and did not find a common link among them.

“At this time, she does NOT believe there is any cluster,” the spokeswoman, Freddi Goldstein, said on Twitter.

Concern over the spread of coronavirus in Hasidic communities had already been raised by a series of large weddings held this week. On Tuesday, the Fire Department broke up one wedding celebration in Williamsburg that had more than 200 guests.

On Wednesday, the state health commissioner, Howard Zucker, said his office was aware of the high number of cases in Borough Park and was investigating it as a possible cluster.

“There’s two possibilities: There’s a lot of testing that’s going on or potentially one or more individuals that have been infected,” Dr. Zucker said. “So that’s something that’s new on the radar and we’re investigating that.”

Stephanie Buhle, a spokeswoman for the New York City Health Department, said there had been “an increase of cases in Borough Park just as there has been citywide.”

Every neighborhood in the city had now had a resident test positive for the virus, she said. She said the average age of coronavirus patients in Borough Park was between 40 and 50.

Simcha Eichenstein, the state assemblyman who represents much of Borough Park, said the outbreak “has hit the Borough Park community really hard.”

“We have seen a huge spike in positive results just in the last 48 hours,” Mr. Eichenstein said on Wednesday. “However, at this point, it is unclear if the spike is due to greater testing or whether the virus has actually hit Borough Park in greater fashion.”

On Wednesday afternoon, a crew in protective jumpsuits could be seen cleaning the urgent care center in Borough Park.

Joel Bernat, an executive at the cleaning company, Disinfect New York, said it had been called to Asisa Urgent Care twice in the last two weeks after patients tested positive for the coronavirus.

He said the city should have issued stronger warnings about the coronavirus two weeks ago, and that the neighborhood was at risk because its residents “live very close together.”

A group of patients, some wanting to be tested, stood on the sidewalk outside the clinic. One woman cradled an infant while another, wearing a mask, took the baby’s temperature. One man held his lapel over his mouth, while others shivered, coughed or blew their nose.

“They won’t even let me find out if I need a test,” said a man who gave only his first name, Chaim. He said he was 72 years old and had a dry cough. “Everything is so vague. Nobody knows anything.”

“I know a lot of people who are sick in bed,” he said. He said he came down with a fever and cough after interacting with sick people in the community.

The Hasidic community in New York has grappled with epidemic illness in the recent past. A measles outbreak that began in New York in 2018 led Mr. de Blasio to declare a public health emergency last April.

The Hasidic community was disproportionately affected by that outbreak.

A preschool housed in the same building as the wedding venue that the Fire Department visited on Tuesday was closed last year by the city for violating a Health Department order that required it to provide medical and attendance records as part of efforts to fight the measles.

For some in the community, the experience of the measles outbreak left a lingering wariness of public health officials and directives from the state.

That has been evident in the days since health officials introduced emergency rules that have upended life in New York, including a ban on public gatherings of more than 50 people.

The persistence of large weddings in the community has raised concern about pandemic preparedness and highlighted the challenge of persuading people to adapt to the public health restrictions enacted amid the coronavirus outbreak. 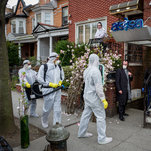