NEW YORK – New York Attorney General Letitia James today announced that she has directed the operators of 16 websites that manufacture and/or sell firearms or firearms components to “cease and desist” selling nearly complete assault weapons into New York State. The possession, manufacture, and sale of assault weapons is illegal in New York, but these companies have been providing the means to violate the state’s assault weapons ban, and often specifically advertise their products as a way to evade law enforcement with phrases like, “If they don’t know you have it, they can’t take it.”

“There is only one purpose for the products that these companies are selling — to manufacture illegal and deadly assault weapons,” said Attorney General Letitia James. “The proliferation of these types of weapons has not only caused indescribable suffering across the country but gravely endanger every New Yorker. We must make sure that these illegal and untraceable guns are not built in New York.”

Figure 1 – The lower receiver as part of a rifle. 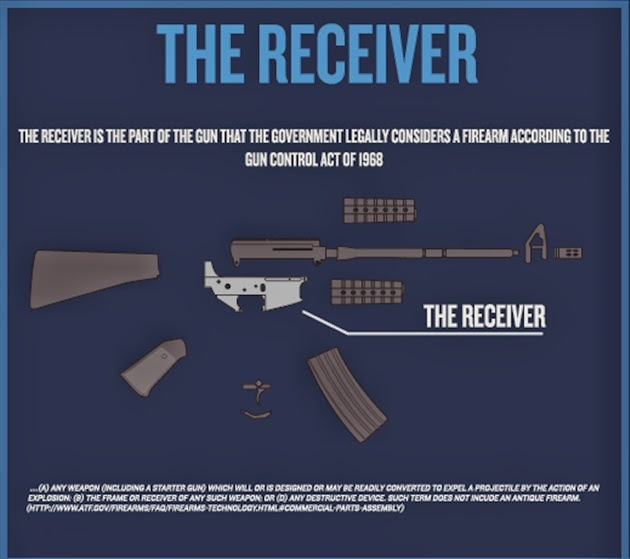 The companies are all offering for sale partially milled, or machined, lower receivers and shipping them to New York State residents for assembly into illegal assault weapons. Composed of either metal or plastic, the lower receiver holds the upper, lower, and rear portions of the firearm together and is responsible for the actual “firing” of the bullet. Aside from a fully assembled firearm, the lower receiver is the only piece that is independently considered a firearm and is thus subject to federal regulation. However, an incomplete lower receiver — lacking certain holes, slots, or cavities — is not considered a firearm. These companies have been marketing their lower receivers as “80%” complete, in order to evade federal regulations. Purchasers on these websites must only make a few small changes with a common drill press to transform an unfinished receiver into a fully operational one. Once milled, the receiver may be readily assembled into an illegal assault weapon, typically unregistered and not branded with a serial number.

These companies call their products “ghost guns” because they are virtually untraceable. They do not require that the buyer hold a federal firearms license or submit to a background check. Many of these sellers also offer for sale specialized jigs — or stencil-like precision tools that help guide a drill press — that are specifically designed to aid the milling process for a lower receiver.

Figure 3 – Lower receivers for sale on one of the websites sent a cease and desist letter.

In her cease and desist letter, Attorney General James argues that these sellers are unlawfully promoting the possession of illegal weapons and do not adequately warn consumers that manufacturing or assembling an assault weapon in New York State is illegal, which could subject them to disgorgement, restitution, and penalties of up to $5,000 for each violation.

Figure 4 – One of the websites sent a cease and desist letter describes how their products can help evade law enforcement, stating “If they don’t know you have it, they can’t take it.”

In the past, the Office of the Attorney General has actively fought the proliferation of ghost guns on New York’s streets. In September 2015, the office announced a thirty-two count indictment in “Operation Ghostbuster,” which marked the first time a state law enforcement agency indicted, and subsequently prosecuted, individuals on charges of assembling and selling ghost guns.