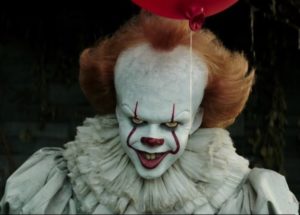 Stephen King’s 1986 novel ‘IT‘ is widely considered one of  the scariest books ever written, both for it’s grisly premise of an ambiguous evil entity that resides in the sewers of a small Maine town and feasts on the local children, and for being the genesis of Coulrophobia – the fear of clowns – courtesy of Pennywise, the infamous form that the monster takes shape in.

Comparing the 2017 film “IT” to the novel, or the original 1990 made for TV movie is unfair. Director Andy Muschietti brings his own version of terror to the screen, balancing aspects of the book with a trifecta of writers – one of whom, Gary Dauberman, is the pen behind “Annabelle: Creation,” who have added their own personal touch to King’s legendary masterpiece.

I absolutely loved the casting choices, with the seven children that comprise The Losers Club being near perfect representations of their literary counterparts. The groups play well off each other, with Jaeden Lieberher as the stuttering Bill Denbrough leading the pack. The addition of modernized humor, including a barrage of mother-jokes and sexual innuendos, is perfect and keeps each of the kids as very likable characters throughout.

The relatively unknown and youthful Bill Skarsgård as the notorious clown Pennywise is purely chilling. Skarsgård transforms the character into a memorable villain, a purely primal being that feeds on children, using their fears to catch them. The notorious sewer sequence that opens the movie depicts Pennywise the Dancing Clown as a creature that seemingly gets off on his desires and lust for blood in an almost pedophilic way.

There were other aspects that were great, and elements that can only accompany a present-day movie, like the unnerving scene of floating children – victims of Pennywise giving a harrowing visual to the often cited catchphrase “they all float down here.” As Pennywise taunts his victims, the haunting echoes of circus music and screaming children are heard, plaguing the viewer with gratuitous malaise.

I went into the movie expecting to be blown away, having watched previews and gearing myself up for almost twelve months. I suppose a letdown is easy when you have great expectations, but the areas of fault are ones that shouldn’t be overlooked, especially when dealing with a record-breaking blockbuster.

There was no subtlety at all with the scares. While the original movie and the book keep a chilling feeling inside you long after watching or reading, this version relied on the often used recipe of Jump! Boo! Ahh! Repeat, all throughout the film.

The special effects were good but again, seemed to be the crutch in virtually every scene. The initial appearance of the clown and his use of the children’s personal fears as torment; is utterly perfect, but after the first few encounters, it’s just the same thing done over and over. Pennywise is truly a scary sight to behold, but the other forms of fear seemed forced at times. Some of the sound and background music is overdone and actually takes away from what would otherwise be terrifying parts.

And for a movie that only tells the first half of the story, and has a running time of 135 minutes, the depth of each character is barely touched upon. Understanding that the novel is a million pages long and therefore it’s easier to get more of a background but in this case, the movie limits its focus completely and I think suffers from that, especially with seven protagonist characters and an ending battle scene that goes on far longer than need be. In reality, the “IT” story should be told in three parts, with two equal movies depicting just the children.

I’ll stick with this in terms of criticism. “IT” is too loud, and too long. I imagine the creators wanted to blow everyone away by a re-telling of King’s lauded novel, but ultimately they come across as trying too hard.

Despite that, “IT” is a fun theater adventure and a solid horror effort in the days leading up to October. My complaints may be trivial and if you are new to the experience and the story, you may find them dismissive. And I did suffer from nightmares after watching, so I guess it can’t be that bad… Fly On In: A Snowy Owl Story