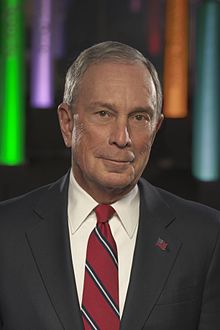 Michael Bloomberg is an American businessman, author, politician, and philanthropist. His net worth is estimated at 53.4 billion U.S. dollars as of July, 2017, ranking him as the 6th richest person in the United States of America and the 10th richest person in the world.  He has joined the Giving Pledge, whereby billionaires pledge to give away at least half of their wealth.  He is the founder and primary owner of Bloomberg, L.P., which licenses computer systems for real-time stock quotes to Wall Street and has news-related businesses.  Even though he was a lifelong registered Democrat, Michael Bloomberg successfully ran for mayor of New York City as a Republican in 2001 due in large part to the support of popular outgoing mayor Rudy Giuliani, and was reelected in 2005.  He ran for a third term in 2009 as an Independent, spending a record-breaking sum–the equivalent of $174.53 per vote (more than ten times his competitor).  Michael Bloomberg is one of the richest people in the world according to Forbes Magazine.  He was frequently mentioned as a possible independent candidate for the 2008 presidential election.

Michael Bloomberg was born in St. Elizabeth’s hospital in the Brighton neighborhood of Boston on February 14, 1942.  His family is Jewish.  Bloomberg’s father, William Henry Bloomberg (1906-1963), was a Polish immigrant bookkeeper for a dairy company and the son of Alexander “Elick” Bloomberg, an immigrant from Russia. His mother, Charlotte (Rubens) Bloomberg (January 2, 1909-June 19, 2011), was a native of Jersey City, New Jersey.  His family lived in Allston, Massachusetts until Bloomberg was two years old, when they moved to Brookline for the next two years, finally settling in Medford, a Boston suburb, where he lived until after he graduated from college.  He is an Eagle Scout.  Bloomberg attended Johns Hopkins University, where he joined the fraternity Phi Kappa Psi.  In 1962 as a sophomore, he constructed the school’s mascot, the Blue Jay.  He graduated in 1964 with a Bachelor of Science degree in electrical engineering.  In 1966 he graduated from Harvard Business School as a Master of Business Administration.  In 2001 Columbia University’s Graduate School of Journalism established the Bloomberg Chair in Journalism with a gift of $1.5 million from Bloomberg L.P.

Bloomberg, in 1973 became a general partner at Salomon Brothers, Wall Street Investment Bank, where he headed equity trading and later, systems development.  In 1981 Salomon Brothers was bought by Phibro Corporation and Bloomberg was laid off from the investment bank.  He was given no severance package, but owned $10 million worth of equity as a partner at the firm.  Using this money, Bloomberg went on to set up a company named Innovative Market System.  His business plan was based on the realization that Wall Street (and the financial community generally) was willing to pay high-quality business information delivered as quickly as possible and in as many usable forms possible, via technology-graphs of highly specific trends.  Merrill Lynch in 1982 became the new company’s first customer, installing 22 of the company’s market master terminals and investing $30 million in the company.  The company was renamed Bloomberg L.P. in 1987.  By 1990 it had installed 8,000 terminals.

Over the years other products, including Bloomberg News, Bloomberg Message, and Bloomberg Trade Book were launched.  As of October, 2015, the company had more than 325,000 terminal subscribers worldwide.  His company also has a radio network which currently has 1130 WBBR AM in New York City as its flagship station.  He left the position of CEO to pursue a political career as the mayor of New York City. Bloomberg was replaced as CEO by Lex Fenwick.  During Bloomberg’s three mayoral terms, the company was led by President Daniel L. Doctoroff, a former deputy mayor under Bloomberg.

He served as mayor of New York City for three terms, 2002-2013.  Even though he was a lifelong registered Democrat, Michael Bloomberg successfully ran for mayor as a Republican in 2001 due in large part to the support of popular outgoing Mayor Rudy Giuliani and was reelected in 2005.  He ran a third term in 2009 as an independent and won.  Bloomberg dropped his Republican Party affiliation on June 19, 2007, stating: “I believe this brings my affiliation into alignment with how I have led and will continue to lead our city”.  Bloomberg is traditionally known as a fiscal conservative with social liberal tendencies.  He was frequently mentioned as a possible independent candidate for the 2008 presidential election.

As Mayor of the Big Apple

With his billionaire status, Bloomberg was able to use a reported $260 million of his own money to finance his campaigns to be elected mayor of New York City.  He took office in 2002 in the aftermath of the September 11 terrorist attacks, and would help rebuild the city in the years to follow.  His tenure spanned three terms from 2002 to 2013.  During which Bloomberg is credited with spurring job growth, reducing crime, and implementing initiatives to combat climate change and improve public health.  Highlights of his time in office include a 32% reduction in crime, a 19% reduction in the city’s carbon footprint, and a 36 month increase in life expectancy.  Bloomberg enforced a strengthened cell-phone ban in city schools.  Under mayor Bloomberg, the high school graduation rate in New York City went up 18%.   Bloomberg stated that he wanted public education reform to be the legacy of his first term and addressing poverty to be the legacy of his second.  According to the National Assessment of Educational Performance, fourth-grade reading scores from 2002-2009 rose nationally by 11 points. Bloomberg replaced the school board set up by the state with direct mayoral control over public education.  He raised the salaries of teachers by fifteen percent while the test scores of students in the city and the graduation rate rose as well.  He opposes social promotion, stating that students should be promoted only when they are adequately prepared for the next grade level.  He favors after-school programs to help students who are behind.  During his time as mayor, Bloomberg chose to forgo the position’s $2.7 million salary over his three terms, instead opting to earn just $1 per year.  His generosity expands far beyond the City of New York.

New York City’s mayor voters knew how he stood on the issues and those positions weren’t endearing for a candidate.  “If I thought we could win, or had a reasonable chance, I would have done it.  It would be totally unlikely, very unlikely that an independent could win.  And in my case, I was mayor for a long

time.  People know where I stand.  I couldn’t pretend to be something I’m not”, Bloomberg said during an interview on CBS’ “60 Minutes”.  The billionaire businessman who was a Democrat and Republican before finally becoming an Independent said his beliefs would have turned off voters in both camps.  “For the Republicans, I’m pro-choice, pro-gay rights, pro-immigration.  That’s a good start there.  You’ll never get their nomination,” he said.  “On the Democratic side, I believe in teacher evaluation.  The big banks–we need to help them rather than just keep trying to tear them down.  Those are not particular things that will help you get the nomination”

“Americans are not walking away from the Paris Climate Agreement,” Bloomberg said in a statement.  “Just the opposite—we are forging ahead.  Mayors, governors, and business leaders from both political parties are signing onto a statement of support that we will submit to the UN, and together, we will reach the emission reduction goals the U.S. made in Paris in 2015”.  “Americans will honor and fulfill the Paris Agreement by leading from the bottom up—and there isn’t anything   Washington can do to stop us,” added Bloomberg, who’s a UN envoy on climate change.  The money will go toward helping countries implement their Paris Accord commitments, according to Bloomberg’s statement. Governors, along with scores of mayors, university presidents, and business representatives are preparing a plan pledging to meet the goals of the Paris Accord.  They vowed to lobby the UN to accept the document just as it would from a national government. Local and state governments can have a major impact on reducing pollution from outright caps on emissions to building transit systems.

Bloomberg is a dedicated environmentalist and has advocated policy to fight climate change, at least since he became the mayor of New York City.  At the national level Bloomberg has consistently pushed for transitioning the United States’ energy mix from fossil fuels to clean energy.  In July, 2011, Bloomberg donated $50 million through Bloomberg Philanthropies to Sierra Club’s Beyond Coal campaign, allowing the campaign to expand its efforts to shut down coal-fired power plants.    On April 8, 2015, to build on the success of the Beyond Coal campaign, Bloomberg announced an additional Bloomberg Philanthropies investment of $30 million in the Beyond Coal initiative, matched with another $30 million by other donors, to help secure the retirement of half of America’s fleet of coal plants by 2017. Bloomberg awarded a $6 million grant through Bloomberg Philanthropies to environmental defense fund in support of strict regulations on fracking in the 14 states with the heaviest natural gas production on December 5, 2016.  Bloomberg Philanthropies became the largest funder of tobacco-control efforts in the developing world.  The group announced a $360 million commitment on top of their pre-existing commitment, bringing his total contributions close to $1 billion.

In 1975 Bloomberg married Susan Brown, a British national from Yorkshire, United Kingdom.  They had two daughters, Emma, born in 1979 and Georgina born in 1983, who were featured on Born Rich, a documentary film about children of the extremely wealthy.  Bloomberg divorced in 1993, but he has said she remains his “best friend”.  Although he attended Hebrew school, had a Bar Mitzvah, and his

family kept a kosher kitchen, Bloomberg today is relatively secular.  Neither of his daughters was raised Jewish.  Licensed as a commercial pilot in his youth, he was a licensed amateur radio operator, was proficient in Morse code, and built ham radios.  In 2013 he owned 13 properties in various countries around the world including a mansion built in the Georgian style. His newest acquisition is a historical property located in London that once belonged to writer George Eliot.  In March 2017 Bloomberg was rank sixth on the UK-based company Rich Topia’s list of 200 most influential philanthropists and social entrepreneurs.