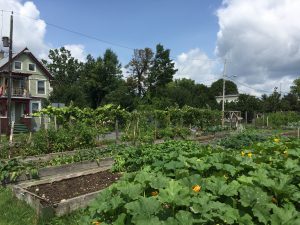 The two raised bed gardens run by FTG have been producing organic vegetables for ten years. Under FTG’s continued stewardship, nearly an acre of formerly blighted vacant lots have been transformed into a lush urban oasis. “The work of transformation and maintenance is not easy and each one of these kids learned to dig deep,” said David Dancy, Lead Gardener and onsite coordinator for FTG.
This season Dancy and Colgate intern Kaitlin Abrams provided instruction for two separate crews of 13 youths. Workforce Development subsidized 50 hrs. of wages for each person. The result has been a bountiful and thriving urban environmental victory. A hard fought victory that was won by old fashioned work.

Wheelbarrows, shovels, hand trowels, and weed whackers are the weapons of choice. These are much-needed tools in the fight against high blood pressure, heart disease, diabetes, and anemia. Though they are beautiful, the gardens do not exist for aesthetics. They provide a source of free organic food for those at risk for hunger in a community that is devoid of these products for any price. “We establish these gardens in a food desert,” CEO of FTG, and Garden Manager, Cassandra Harris-Lockwood said in reference to the importance of the garden. She continued “These Gardens provide order, structure, beauty, and promise in an environment that rarely boasts these elements.” 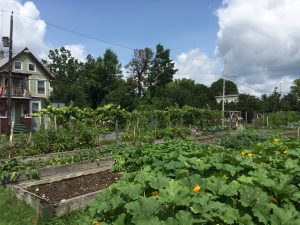 The role these young people played in maintaining the garden was vital. The two locations, one o n Linwood Pl. and the other on Jay St. had been tended by Lead Gardener, Dancy and a handful of volunteers. They were barely able to keep up with the early spring demands. “We began the process and set up a system but the kids did most of the heavy lifting over the course of the summer. They provided much-needed hands with things like weeding and refilling the beds with dirt,” Dancy said.

Dancy was also impressed with the newly acquired work ethic many of the participants demonstrated. “We needed continuous wheelbarrows of dirt moved every day and they worked as an efficient team getting each task done,” he said. “They also worked as a team. There was continuous weeding that needed to be done as well.  Without any orders to do so, they traded tasks seamlessly and never let me down.” he added. 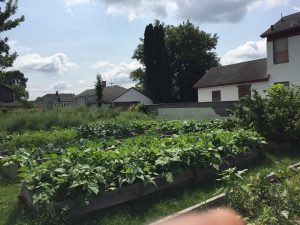 The youth learned planting skills with seeds and seedlings. They learned weed identification, wild herbs, and their uses. They harvested and dried mint and took it home for mint tea. They learned to tie up, sucker and harvest tomatoes. Harvest beans and thin carrots. They learned how to dig potatoes and harvest collards, kale, beets, turnips and they all loaded up on hand picked berries and apples abundant on the bushes and trees. They were also introduced to various herbs and some of their uses.

They learned the difference between straw and hay and how to mulch with the straw and how it keeps weeds down. They all took home many varieties of vegetables for their families. Some continue to come to the gardens and bring home food. 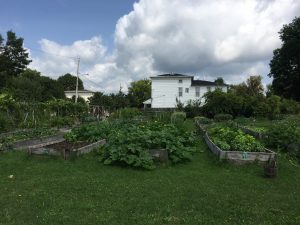 The beautifully maintained space at Linwood was unexpectedly chosen as a location to host a visit from an African King from Cameroon. The days leading up to his visit were spent in preparation and the crew on hand didn’t disappoint. Bunting, tents chairs and tablecloths were arranged for a temporary royal court and the youth from Workforce Development turned a vision into reality.

On the last day of the program Harris-Lockwood prepared several dishes all from crops they had tended and most had never had before. Over the course of the summer, the young people grew more adventurous with their diets, trying foods they had never heard of or seen. This last day, even the most reluctant tried a bit of everything.

A raw beet, carrot and raisin salad, pasta and pesto, potato and green bean stew and beet greens were on the menu. Neither the food nor the youth did disappoint.

Next year we will do it all again and another crop of urban gardeners will be ready and able to sustain themselves and their families and also be prepared with Green Job Skills to answer help wanted ads in our agriculture rich local economy.