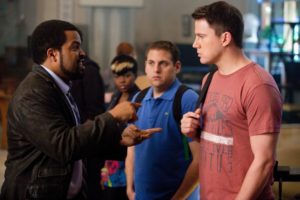 “21 Jump Street,” is a story by Michael Bacall and Johan Hill, keeps loose ties to the television show that preceded it, while coming up with a funny and oddly warm film that breaks convention. It takes the awkwardness of high school – being funny enough to comment on its upsides but smart enough to recognize its trials and tribulations – and wraps it up in a buddy cop procedural that has both humor and wit. What we find is a pleasing and entertaining film throughout, and surprisingly, a tremendous amount of chemistry and camaraderie between Hill and co-star Channing Tatum.

Through a quickly paced plot styling, we are introduced to the film’s central characters, Schmidt (Hill) and Jenko (Tatum), the former a nerd-type in high school and the latter the jock without brains, the film is quick to show us some ill feelings between the two in a high school flashback, quickly propelling us to the future where both are trying out for the police. Animosity left aside, the two become unlikely allies, Schmidt as he helps Jenko master the intellectual tests of the police department and Jenko who helps Schmidt with the physical tests his short stature ill equips him for.

However, after a faux pas during an arrest attempt early on in the movie, they are sent by their captain to 21 Jump Street, an undercover assignment where the two will be asked to infiltrate a high school synthetic drug ring.

What works about “21 Jump Street” is the ‘return to high school’ motif that has been done in countless films before (“13 Going on 30,” “Never Been Kissed”), coupled with a multitude of laugh-out-loud sequences throughout. Bullied in high school Schmidt, of course, assumes that this go around will be just as terrible, while Jenko, king of the hill during his high school experience assumes that it will be just as easy for him this time. Both learn they are quickly mistaken, it makes for some really fun scenes. One of the film’s funniest sequences involves the two taking a new drug called H.F.S., with some on screen pop-ups alerting us to the various stages the drug takes the two on.

Scenes like this are of course interspersed with other comedic gems, such as car chases with explosions that seem likely to never happen (the pair thought they’d get more of this when becoming cops), and bonding experiences the two have with students such as drug dealer Eric Molson (Dave Franco) and Molly Tracey (Brie Larson) who plays an unlikely love interest for Schmidt.

The strongest asset of the movie is the on-screen chemistry between Tatum and Hill, and Tatum’s comedic talent, which was not so apparent in films like “Magic Mike” and “White House Down.” And while both help each other throughout, it’s interesting to see the divide that high school causes between them this go around, even as Schmidt tried so hard at the film’s onset to not let this happen. 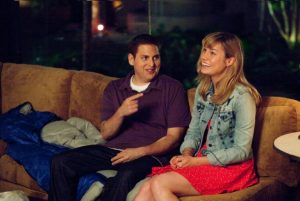 Through a turn of events, the duo forgets their undercover names during an early meeting with the principal, and thus each ends up taking the others classes: shy Schmidt enrolled in drama, and the academically challenged Jenko finding himself in AP Chemistry. A lazier film would have used this switch-up for comedic jokes at the characters’ expense, but “21 Jump Street” has a heart under its comedic exterior, and uses the scenes to help each heal from decade old wounds of inadequacy and rejection. Under it all, “Jump Street” is a very sweet movie, and I wasn’t expecting this at all at the film’s opening.

The film has a fair amount of action sequences, especially toward its high octane finale, but the high school scenes are the real gems of this movie. We also get to see the inclusion of some other fun characters such as the duo’s boss, a man named Dickson (played hysterically by Ice Cube), a flirtatious chemistry teacher who can never seem to say what she means, and an aloof drama teacher who can’t seem to intervene during a fight during a play, as he remarks it’s much more interesting than anything he’s seen before. Additionally, a cameo by Johnny Depp, who appeared in the original “21 Jump Street,” makes a crowd-pleasing statement.

All in all, “21 Jump Street” is a solid movie, blending successfully the elements of a fun, high school film with the buddy cop film throughout. If you’re expecting the seriousness of the original TV show here you’ll be disappointed. It’s not that kind of film. What it is is a warm and funny comedy that makes you feel better at the film’s close for having watched it. In a sea of often raunchy comedies, it’s a welcome change.