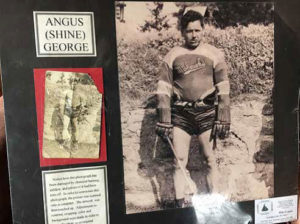 Some would say he was a great Mohawk; world class athlete, fearless high steel worker, an expert fisherman, master carpenter and highly skilled craftsman with a rich command of his native language and strong opinions about the world. To his mother Wari:so:se he was Sohahiio, the “Good Road”, but to his non-Native friends he was Angus “Shine” George, my uncle, the greatest lacrosse player of his time. He was a powerful man who in his prime carried 225 pounds of rock solid muscle on his six-foot frame. His great strength came from years of labor in the lumber camps of the Adirondacks whose dark forested mountains absorbed a boy of 12 in desperate need of a job to provide for his younger brothers and sisters.

It was 1922 when my uncle took up the ax and crosscut saw.  Like many young people, he did not have the option of continuing his few years of schooling. His father, my grandfather, had drunk his way into obscurity, selling the family home for a few dollars and a bottle of whiskey.
Angus and his mother had come home from a long trek to town where they sold splint baskets by the dozen only to find out their house was sold.  They spent a precious few dollars on a small frame house across the road from their former home and there Ang Nus labored with Wari:so:se to care for John-Katsitsiakeron, Peter-Ranikonhionni, Joseph-Tiawekate, Margaret-Kawennaronnion, Dave-Totkennion, and Ann-Konwationni.
Their possessions were few but they ate well with fish from the St. Lawrence River, vegetables from the garden and deer Angus shot with his .22 caliber rifle. No one went hungry among the Mohawks in those tough times; a family in need would have sacks of potatoes and smoked sturgeon on their doorstep, placed there by silent neighbors.
During the winter months at the lumber camp, Angus carried water and wielded his ax while his mother wove sweet grass baskets or tended to the children. When the snows melted they returned to the reservation to take part in the fish harvest, plant crops and send the younger ones off to school for a few weeks.
Like all other Mohawk youths, Angus carried a lacrosse stick in his spare moments, twisting the hickory stick in his large hands, tightening the thick leather strings which formed a deeply pocketed net for him to cradle a hard rubber ball.  He realized he might have talent at the game when he took part in throwing contests at the local fair; as a teenager, he hurled the ball with his stick farther than anyone else.
His solid build and firm stance adopted from months of heavy ax work made it impossible to push him aside.  He used his heavy shoulder muscles to brush opponents out of his way; they also gave him the power to hurl the ball at a target with bullet like speed. Lacrosse was a passion in Canada during the first decades of the 20th century, with Natives players ranking as the best in the world.  From its beginnings among the Iroquois hundreds of years ago, it had become Canada’s official national game.  By the 1930’s it was tailored to fit in hockey arenas as a way of keeping the buildings full during the summer months.
The Iroquois were quick to adapt to the speed and finesse of box lacrosse with Angus quickly rising to become a star player.  He had offers to play professional football and hockey but chose to stay with lacrosse.  He was given a contract to play in Vancouver so at 21 years of age, he boarded a train in Cornwall, Ontario for the week long journey across Canada to the west coast.
The money was good.  There was enough for him to live well in British Columbia as a member of the North Shore Indians team and send funds home to care for the family. He enjoyed the acclaim as an athletic star and was honored to represent Canada’s Native people at the Los Angeles Olympics in 1932 despite having his game demoted to exhibition status.
Angus might have stayed in California, taking on Native roles in the movies; he had offers but autumn was coming and he longed to return home, to the rivers and forests where he would be with his family, weaving ash splint baskets and telling enchanting stories in their warm cabins beneath the heavy snows.
Angus played the game for three decades then hung up his stick to devote his time to fishing, his wood shop and keeping a close eye on his beloved St. Lawrence. He thought and dreamed in Mohawk, reaching out to his mother and distant brothers who had left the reservation after WWII never to return.  He did not care for the new ways and spoke bluntly, critically, of the latest generation of Mohawks who had lost language and knowledge when they were forced from the woods and waters in the development craze of the 1950’s.
Taken to a sterile hospital in his 82nd year after he became ill, Angus told his niece he feared losing his independence and wanted to go home.  On January 8, 1992, Sohahiio was welcomed into the spirit world by Wari:so:se knowing he had done the best he could as a Mohawk human being. 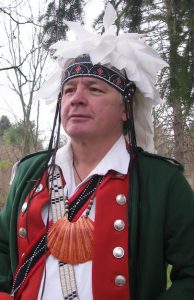