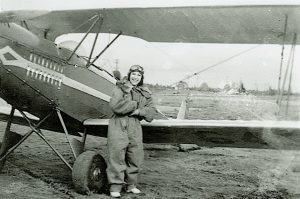 Back in the days of Amelia Earhart, Ellensburg’s first aviatrix took to the air! As she bumped-on-down the pasture-turned-runway, “Flossy the Flyer” lowered her goggles, opened the throttle, and readied herself for adventure as the engine roared. As she ferried down the tarmac, the drop-tail raised and her plane nodded level. Her bi-plane’s wings quivered, then shuttered ~ then lifted the young pilot – from the terrestrial to the celestial – as she glided through the air!

There’s nothing like being air-borne! Particularly with an open cockpit, as in the days of Amelia Earhart. My mother, then a darling Elementary Ed student at the State Normal School in Central Washington, would have many first-hand experiences to later tell her classes about in her one-room schoolhouse in the borough of LaBam. 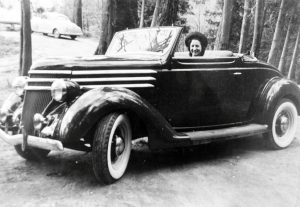 Those stories, like the one about her having to pull off an emergency landing in a cow pasture, would readily capture the attention of the boys and girls in the grade school where she taught. And when she hand-crafted model airplanes and legendary World War I fighter aces for her Art classes it’s not difficult to imagine that such art-work carried with it a certain kind of authority – as their school teacher was, after all, a “for real” aviatrix ~ who also, let’s not forget, owned a sporty ’36 Ford Coupe Deluxe! 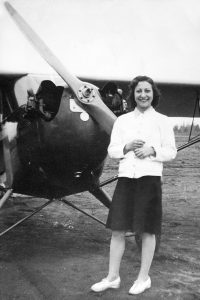 Florence Massouras, “Flossy the Flier” as her fellow winged- men called her, was, in fact, the first woman to be licensed as an aviator in Central Washington. She flew one of the popular planes of her day, a light-crafted Piper Cub. After World War I these planes were useful, as they still are today, for their maneuverability in dusting crops ~ if not also for daredevil stunts at air shows! As far as I know, my mom never tried any corkscrew barrel rolls, loop over’s or loop under’s, or split-S stall-turn hammerhead maneuvers.  But she, sure enough, was adept at the practice of punching holes through the clouds in what can only be described as heavenly adventures – an amazing achievement when you think that these airborne dynamics took place in a time that was not so very far removed from the day when the Model-T Ford was a novelty.

Mom was a Member of the Ninety-Nines, a professional society of women pilots founded in 1929 by 99 women pilots “with a passion for flying,” women who, to quote Amelia Earhart: all “flew for the fun of it!” Flossy actually had some societal correspondence signed by Amelia Earhart, a postcard also signed by World War II flight-hero General Jimmy Doolittle and World War I flying ace Eddie Rickenbacker, who were both awarded Medals of Honor. But her prized possession was her silver air-wings pin, a membership token from the Ninety-Nines which she donned on very special occasions. All of this was a lot for a small-town girl from Ellensburg in the aftermath of the Great Depression. Her sport was certainly adventuresome enough, but it’s also important to note that aviation was – at least for her – much more than a novel endeavor: it was foremost a wholesome affair ~ an experience that lifted Flossy, remarkably, even wondrously from the dark-rich sod of the Kittitas Valley to the breath-taking realms of the heaven lies above. 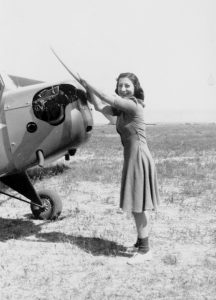 Adventures into the stratosphere began with classroom instruction on terra firma. Mom’s class was full of men, and I’m guessing that some of them took-a-liking to her, as she was – how can I put it as her son? – she was “a looker” all right!  She was sporty

enough for sure, all dolled-up in her leather monkey suit, with flying goggles poised the way that gals sometimes wear sunglasses on the crest of their heads today. What would it be like for the guys in her class to see Flossy stretch out her arms and grip the wooden propeller of her Piper Cub ~ and with no dearth of grit, kick-start the 50 horse- power Continental engine, for a sure-fire (albeit sputtering) turnover? Back in the 1930’s it took a certain kind of principled motivation for a woman to enter into the world of aviation, a realm dominated by men, without spoiling her femininity that is – still remaining grateful for open doors, still dressing in dresses every day, all the while holding fast to her sturdy domestic values and home-making principles of life

The 1930’s to 1940’s was an era very much different than our own. Family values were inseparable from who people were and also what they became if they were raised in Ellensburg.

All her classmates that I met at her High School Reunions well remember The Palace Café that her father Thomas Massouras owned. Back in the day many of the boys treated their sweethearts to banana splits and sarsparillas at The Palace, which became “a family restaurant” under his auspices. As Greek immigrants, Flossy’s family appreciated their newly gained heritage as U.S. Citizens. Not unlike other townsfolk, they’d regularly invite soldiers on leave to their home for Sunday afternoon family dinners and leisurely fellowship.  Some of the old- 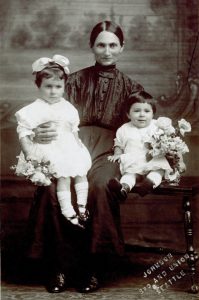 timers also remember the matriarch, “Ya-Ya” as she was called, who was typically perched in her very own venerable booth at The Palace. Flossy’s grandmother, Photeiné Massouras, walked to Craig’s Hill every day, ‘til she was well over 100! In its own way, the family’s business was an extension of the family, with winsome Greek hospitality extended to customers, along with almost-home-cooked meals.

Ellensburg is “a good land.” And this can be seen – as it once was seen, through un-foggy goggles – from the blue skies. From that lofty vantage point today, Flossy the Flier now looks on more clearly.