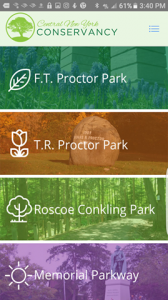 (UTICA, NY)  — A walk in the park just got easier…and healthier!

“We hope that everyone who loves Utica’s parks, especially for recreation and exercise, will download the Central New York Conservancy’s new app now!” said Peter C. Falzarine, executive director of the Conservancy.

The app is free and available to download from iTunes and Google Play stores.

“The app is called ‘Utica’s Parks & Parkway System’,” said Falzarine, “And we developed it to show residents and visitors to the Mohawk Valley the beautiful Olmsted parks and its many trails, points of interest, photos and more.”

“We also like to think of this app as showing everyone all the different ‘pathways to health’ that we have in Utica’s Parks and Parkway System,” continued Falzarine. “The detailed maps provide lots of information about the trails, including where they are located, the composition of the trails, accessibility, and whether they are open to bicycles and other kinds of transportation, in addition to people on foot.”

The app includes details about F.T. Proctor Park, T.R. Proctor Park, the Memorial Parkway and Roscoe Conkling Park/Valley View. Trails are marked and include sufficient descriptions about and distances for each trail so walkers, cyclists, runners, skiers, and snowshoers may plan their outings.

“The app also includes clearly labeled points of interest in each park, like the Lily Pond and bathhouses in FT Proctor Park, the Utica Zoo in Roscoe Conkling Park, and the ball fields in TR Proctor Park,” said Falzarine.

“We hope that as people download and use the app that they will take photos of their park visit and share them with us on the Conservancy’s Facebook page,” noted Falzarine. “We plan to add additional features to the app to increase its use, too,” said Falzarine.

“Look for updates to include plant, flower and tree identification, additional trails and suggested walking routes, even the ability for people to upload and share photos while in the parks, so they can invite friends to join them for a walk or run.”

The app is made possible through the generosity of a number of corporate and individual sponsors who are also acknowledged on the app itself: the Community Foundation of Herkimer & Oneida Counties; the Bank of Utica; The Boilermaker Road Race; Indium Corp. and MacCartney Family Foundation; Stewart’s Shops; and Ms. Elizabeth Dugan.

The app was developed by Quadsimia, with considerable assistance from HOCTS – the Herkimer and Oneida Counties Transportation Study Group.

“We are so appreciative of the financial support from our sponsors, the technical expertise of our app developer, and the outstanding information and participation contributed by HOCTS,” said Falzarine