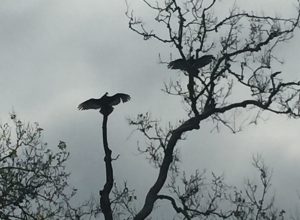 In a break between the rains on the morning of June 5th, these two turkey vultures were drying themselves in an eerie pose atop Clinton’s giant Sycamore on the north side of the Oriskany Creek Bridge. It drew my attention to the condition of the tree which didn’t look good at all. I wondered if they were harbingers presiding over the demise of the “great one.”

I sent this photo to Highway man Jonathan Scott and asked him about it. This was his reply.Hi Cassandra, I met with an Arborist from Bartlett Tree Service, they are the folks that care for the trees at Hamilton College. The good news is that the tree is not in mortal danger!

The Sycamore is suffering from Anthracnose, which is common in hardwoods. It is a disease that is treatable. They are going to begin a treatment regimen right away consisting of fertilization of the root structure and an injection at the base of the tree in August. They will inject fungicide every 2-3 years.

They will also trim a few dead branches for safety reasons.They said Anthracnose is most prevalent in early spring when cool, moist weather conditions favor disease development; our spring was primed for that. The tree will produce a second set of leaves, some of which have already blossomed, and they said those should be much healthier.

If you look near the base there are much better looking leaves already. In the past Terry Hawkridge used to inject that for us but when he left Hamilton College the treatments stopped.I put the tree on a perpetual care program with Bartlett. The Arborist is from Verona and is in Clinton frequently. He said he has watched that tree for years. I feel it is in the best hands now.So, it appears that the siting of the buzzards was them simply doing what we’ve all been doing this spring and now summer, get little sun when we can get it.