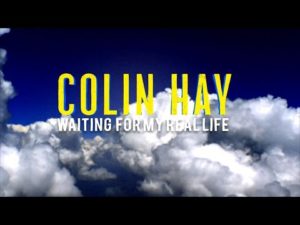 Who is Colin Hay? This is the simple question posed by the TriCoast Worldwide documentary “Colin Hay: Waiting for My Real Life” directed by Aaron Faulls and Nate Gowtham. To myself, a man born in the dying seconds of 1979, the I’ve experienced the ‘80s on reruns. As such, my first experience with Colin Hay was not of his time with the hit group “Men at Work,” but with a somber, bittersweet, and beautiful song called “I Just Don’t Think That I’ll Ever Get Over You,” featured in Zach Braff’s 2004 romance/drama “Garden State.”

This is typical of Hay, who himself jokes in the documentary that his new fans didn’t even know who “Men at Work” were, and his old fans had never heard of the new hit TV show “SCRUBS,” which had breathed life into Hay’s career in the 2000’s.“Waiting for My Real Life,” which runs at an hour and 24 minutes doesn’t so much attempt to depict Hay’s career as a rise and fall tale, but an enduring one. The directors don’t want us to idolize “Men at Work” or Hay as enigmas, but want us to understand his life: why he moved to Australia, why he chose music as his life’s work, and why he, amidst mounting odds, refused to throw in the towel.

Born in Scotland, “Waiting for My Real Life” is quick to take us to the Hay family’s move to Australia in 1967, ‘the land down under,’ which would become the fodder for “Men at Work’s (with Hay at the head, formed with guitarist Ron Strykert) song “Down Under.” We learn some quick things about Hay: he grew up next to a music store, and remarked how amazing it felt to be surrounded by musical instruments all the time. “I wasn’t an expert in anything,” [type of music] Hay stated, “but I knew that I wanted to write songs.”

A good chunk of the first 45 minutes of the film is devoted to Hay’s life with “Men at Work,” detailing how they started out a small band playing pubs to playing sold out venues. We get some music industry styling along the way, from the band being signed by Peter Karpin to CBS Records Australia in 1981. We also see how their songs were made, from moving up saxophone solos on their hit “Who Can it Be Now,” to bringing the band to the forefront of American culture, which, at the time, was a near impossible venture.

The ‘80’s was a magical time for music, and “Waiting for My Real Life” hits on the high points, such as ripping guitar solos, outlandish wardrobes, and a musical sound that would forever cement that decade in the annals of musical history. And along the way we learn some of the struggles of the band, such as infighting and flaring tempers that would eventually lead to the band’s demise.Aaron Faulls and Nate Gowtham take us through these events systematically and emotionally. Much of the documentary is told through interviews with Hay himself, former bandmates, and a legion of friends, family, and other celebrities.

The high point of the documentary is the effect that Hay seems to have had on others in his time after “Men at Work,” even though much of his early solo career was not successful. But it was inspiring. At 60 years old, Hay stated that he felt like his life was really just starting, and it’s an inspiring thing to see a man preach about how his fall from grace was not really a fall, but a rebirth.
We see that Hay released 5 records with Compass Records, who also re-released all of Hay’s earlier solo work that initially didn’t fare well. It was inspiring, says “SCRUBS” creator Bill Lawrence, that in a town like L.A., where everyone wants to talk up what big projects they are doing, that Hay would get up in front of modest crowds every night, explain his rise and fall, and further explain that he may in fact be happier where he is now than in the height of his success.

Where “Waiting for My Real Life” struggles a little is in its run-time, which feels longer than it should, and in the sparse treatment that the documentary treats Hay’s life apart from his music. We learn of an ex-wife, and a current one; and a father and bandmate who lost their lives under Hay’s watch. But it seems that the film doesn’t devote enough time to these happenings, or these people. It speeds through Hay’s career, and what that meant to him, but saves little time for the people that made up Hay’s remarkable world.

All in all, “Waiting for My Real Life” is a solid documentary. It’s filmed brightly and crisply, highlights Hay and “Men at Work’s” greater accomplishments, and feels much more than just an MTV special on an artist: It feels like a complete work. It’s missing some elements to make it perfect, but, for a film trying to pack an man’s entire life into an hour and a half, is ultimately forgivable. You’ll clearly get more out of the film if you’re an ‘80s lover or a fan of Hay’s work, but the film is also accessible for those casual fans looking for a detailed foray on a band, or a man, they may have only heard in passing.