If you have lived in Utica and are a Millennial; you know the name Gino Brown aka GSwiss, local (rapper/music artist). Gino began his love for the musical art form at the age of 9 and has been catching his dream ever since. He said, “I would steal my sister’s tapes to get ideas, write rhymes, and along with his friend that could beatbox would then perform for all the project kids.” He said, “I realize at a young age that “dreams” are not pursued they are caught.”

Gino grew up in a poor family and throughout his childhood faced many struggles. He was labeled a problem child and was even told by a fourth grade teacher “your Mother was on welfare and you will not amount to anything.” For a while he seemed to have lost his innocent childhood spark and had no direction. He suffered from depression, often got himself in trouble and even was suicidal.

However, in the 6TH grade he met Miss Cooper, he did not know it at the time but she would become pivotal in helping him to regain his zealous nature. He said, “She always believed in me.” In fact I got kicked out of high school at 15 years old but when I think about it, she always encouraged me. This helped me to believe in myself. Gino has written a song in honor of his teacher and will release it this year.
When Gino was 23 Years old his Father Passed away. In his sadness he found determination and growth. His writing and performing became a therapeutic tool for his grief. He would not accept anything other than success. With the work ethic of his Grandpa Ronnie who he said, often worked multiple jobs to take care of his seven daughters and grandmother, he began to work. Gino has been writing, rapping and performing ever since. His hard work has paid off. He has receiving his 4th mix-tape award in 5 years (a recipient from 2 different award shows). This year he took home “Hottest Unsigned Artist of the Year” at this year’s 2017 “All-star Mix-tape Awards” based out of NYC. His goal is to create opportunities for not just himself but other independent music artists. He has 3000 mix tapes worldwide and has been featured in more than ten magazines. The latest he made the front cover of 1212 magazine.

Now 33 years old he said he believes he has finally mastered the elements of his art form and who he is an artist. He has made it a point of being a positive example for his 9 year old son Giovanni. In addition to rapping, he often volunteers as motivational speaker local places like the Hope House. He plans on working with both Head Start and the Refugee center in the near future. 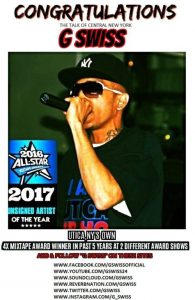 Gino grew up being told if you want to make it big “Get out of Utica.” His response to that was “NO.” Regardless of where his success takes him, he will take Utica with him, representing for his community and always calling it his home. Puma Is Dropping a Pride Collection With Cara Delevingne, and Wow, I Need Those Slides