Spirit Game: Pride of a Nation to Host Special Screening in Syracuse for Haudenosaunee 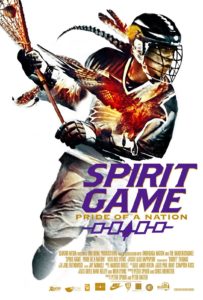 SYRACUSE, NY—When the World Indoor Lacrosse Championships were hosted by the Onondaga Nation in 2015 it was a big deal. Former U.S. Vice President Al Gore even attended, and rooted for the Iroquois Nationals over Team USA. Never before had an Indigenous Nation hosted a championship of that caliber, putting not only the Indigenous history of lacrosse and the prowess of the Iroquois Nationals on the world stage, but the very sovereignty of the people. This story is told in the new documentary “Spirit Game: Pride of a Nation,” which premieres May 24 in Hollywood and June 3 in Syracuse, NY.

“This story is so important it clearly has to have a Hollywood Premiere,” explains Executive Producer Gayle Anne Kelley, “but the Syracuse Premiere, in the Onondaga Nation’s traditional territory, is the most significant. This is their story.”

The film showing, at 2 pm Saturday June 3 at the Palace Theater, is free and open to all citizens of the six Haudenosaunee nations on a first-come, first-serve basis as well as invited guests. A second showing will immediately follow the first to accommodate those unable to be seated for the first showing.

Director Peter Spirer and Executive Producers Gayle Kelley and Oren Lyons will be in attendance with other VIPs.

Spirit Game: Pride of a Nation not only features thrilling non-fiction sports drama, including the dynamic action of the legendary Thompson Brothers, but offers a primer on the long, rich tradition of the sport.  Excitement for the film is building: an exclusive clip posted on Yahoo! Movies received 19 million hits. The film will be shown in select theaters across the country including the film’s Public Opening at the Palace Theater in Syracuse at 7 PM on June 24.  The movie will be available on Amazon and on iTunes on June 20.