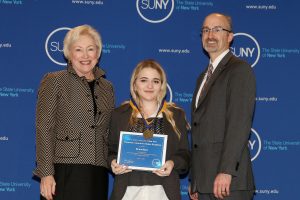 to 256 students from across the university system. Three Mohawk Valley Community College students were among those who earned this honor: Amila Muhovic, Bruna Rosic, and Almir Tricic.

Muhovic, a General Science major from Utica, N.Y., has achieved great academic excellence and has become an active member of the MVCC student body. She has participated in multiple campus groups and clubs, including CSTEP, the Sustainability Club, ATOM-E Science Club, and Women in Science and Engineering (WISE). Muhovic has been a study group leader for CSTEP and is the current president of ATOM-E. She plans to attend a pharmacy school.

Rosic, an English major from Croatia, Europe, has achieved academic and personal success as a student at MVCC. She completed her English as a Second Language program with excellent grades and will graduate with a degree in Early Childhood Education. Rosic has been an active member of the Phi Theta Kappa honor society, in which she is vice president of scholarship. She also works in the Learning Commons, where she helps her fellow students succeed.

Tricic, an Engineering Science major from Utica, N.Y., has earned a cumulative 3.8 GPA. He captained the men’s soccer team, received the Alumni Award, and has served as student assistant coach of the soccer team. Tricic is a member of Student Congress, the Future Engineers Club, and is president of the Indoor Soccer Club. He also is a tutor in the MVCC Learning Commons.

The Chancellor’s Award for Student Excellence was created in 1997 to recognize students who have best demonstrated, and have been recognized for, the integration of academic excellence with accomplishments in the areas of leadership, athletics, community service, creative and performing arts, campus involvement, or career achievement. Each year, SUNY campus presidents establish a selection committee, which reviews the accomplishments of exemplary students. Nominees are then forwarded to the Chancellor’s Office for the second round of review. Finalists are then recommended to the Chancellor to become recipients of the award. Each recipient receives a framed certificate and medallion, which is traditionally worn at commencement.