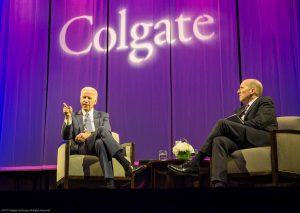 Vice President Joe Biden’s Lecture at Colgate University on March 24th was an ardent plea to the 5,000 assembled at the Sanford Field House to prepare for a technological revolution which has already begun.Citing Moore’s Law, Biden admonished the students to be ready for “innovations beyond your wildest dreams.” First introduced by Gordon Moore in 1965, the law accurately predicted the rate of technological advancement to a doubling of components per integrated circuit.

Biden coined the term, “The Fourth Industrial Revolution,” to make his point. He predicted a rapidly changing, flexible, professional workplace demanding “upskilling.” He described this upskilling as a perpetual training environment that keeps pace with technological innovations, will play an integral role in every profession. This adaptability will be just as important to the success of businesses as new talent.

The industry will have to be prepared to train and maintain advantage by constantly retooling in a workplace environment. This will require investment in education early on to ensure young people are ready for the job world. Job training for high-tech and trades are essential for continued growth in a competitive workplace.

New York, with its industrial history, has a romantic appeal to Joe Biden. The United States’ 47th Vice President made a point of sharing his familiarity with our region. Biden is a Syracuse Law School Grad and is also married to Dr. Jill Biden, “A girl,” he said, “from Skaneateles.” His roots in Upstate New York run deep.

Biden is not alone in his prediction. Ray Kurzweil, a well-known author, futurist, and inventor currently employed by Google, has looked at technology as a means for human progress. He predicted that computers will be as smart as humans in twelve years. The explosion of artificial intelligence will result in what is called, “The Singularity,” by futurists all over the world.
Biden’s emphasis on technology and the future was well received but, he didn’t stop there.
He also shed light on Congress. Hours earlier, before his speech, a historical vote on Obamacare, also known as ‘The Affordable Care Act,’ was tabled.

In Biden’s opinion, “Congress showed they have a spine.” He said, “They stood up.” He was referring to the historic attempts at dismantling The ACA without a reliable replacement.He made a case for the dwindling Middle Class and the victims suffering the highest rates of suicide, middle-aged white males.He also touched on the need for Registered Nurses and the explosive progress in the field of medicine which will lead to a cure for cancer. All of these things will happen as a result of technology. “I will see more change in the next ten years than I have my entire lifetime,” he said.“During my entire career I have never owned stock or accepted gifts while serving the people,” he said. Biden was clearly making a distinction between himself and his colleagues who have taken advantage of their elected office to “line their pockets.” Biden made a point to note that the current administration makes up the richest cabinet in American history.He never put anyone down and never mentioned President Trump by name, but he did make a case for politicians with a moral compass who sought elected office to serve the people. To sum it up, “I led with passion and dignity,” he said.

When questioned by Colgate president, Brian Casey, as to his decision not to run in the 2016 presidential race, “I didn’t have the heart to run. I lost a piece of my soul. I do not regret having not run, but I do regret not being President.”It was difficult for all to endure Biden’s evident sorrow reminiscing over his agonizing loss and decision. “He was the finest man I have ever known. My son was sick,” he said, in reference to Beau Biden who recently died of cancer. “And I knew I couldn’t give the people I serve 100%.”Biden is known to shoot from the hip. He rarely speaks through a publicist and has a reputation for spontaneity.Good, bad or indifferent he has earned a lot of respect for saying exactly what is on his mind. He made it clear that on March 24, 2017, his mind was on the future.He spoke of a bright path illuminated by ideas and possibilities, fueled by dreams and hard work. A path that will lead us to energy independence and solutions to age-old problems. A path we all need to take together.