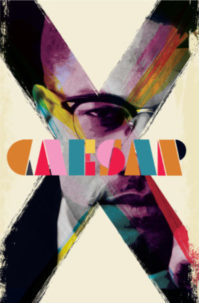 X: Or, Betty Shabazz v. The Nation, a new play written by 11-time Audelco nominee Marcus Gardley, is about the assassination of Malcolm X-both the story we think we know and illuminating details that have seldom been shared. Gardley adapts the framework of Shakespeare’s Julius Caesar for his play to deepen our understanding of one of America’s most complex, compelling historical figures and explores the tumultuous landscape of ideology and activism in the 1960s.

As a companion to X, The Acting Company is also presenting Shakespeare’s Julius Caesar, featuring the same cast. Through the story of Julius Caesar, a rising political star torn down by his most trusted allies, audiences witness the art of persuasion, the ugliness of backroom politics, and the historical patterns we can’t stop repeating. Tackling essential questions about the balance of ambition, personal loyalty, and love of country, Shakespeare’s timeless political masterpiece has never been more relevant.

“This repertory tells stories that I hope will charge audiences to look at the past with an eye to take action in the present,” says The Acting Company’s artistic director Ian Belknap.

These performances conclude a three-year artistic and educational collaboration with nearly 30 universities, colleges and community partners across the country. The CNY consortium is made up of SUNY Oswego, LeMoyne, and Hamilton Colleges, and allowed area students to learn from directors, actors, and other company artists, in Central New York and through visits to New York City.

Tickets for the productions of X and Julius Caesar are $20 for adults, $15 for senior citizens, and $5 for students. All seating is general admission, and audience members are invited to stay for a post-performance discussion after each performance. For tickets or more information, call the box office at 315-859-4331 or visit www.hamilton.edu/performingarts. Amtrak needs 1.5 billion bailout, prepares to cut up to